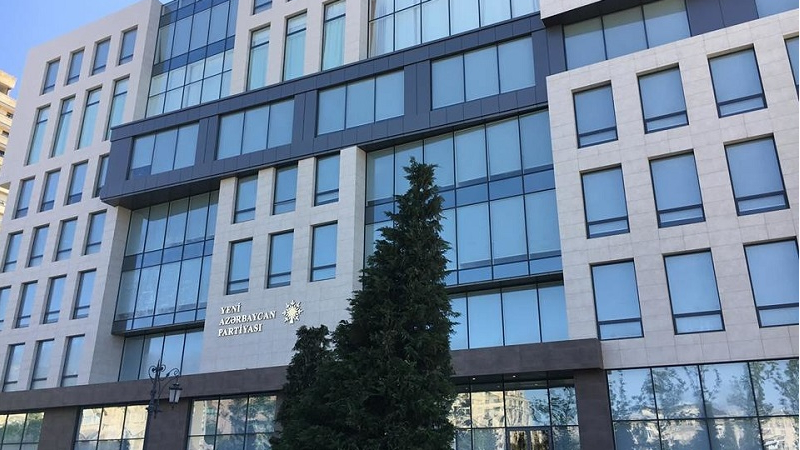 The ruling New Azerbaijan Party (NAP) has sent an appeal to international organizations regarding the latest provocations of Armenia on the border with Azerbaijan and the illegal resettlement of Armenian families from Lebanon in the occupied territories of Azerbaijan.

The appeal emphasized that for almost thirty years Armenia, grossly violating the norms of international law, has been holding under occupation a fifth of the internationally recognized territories of Azerbaijan - the Nagorno-Karabakh region and seven adjacent districts, according to the party.

“As a continuation of the aggression policy, on July 12-16, 2020, Armenia carried out armed provocations along the Armenian-Azerbaijani border using artillery and mortars to seize the combat positions of the Azerbaijani Armed Forces. During the clashes, the Armenian armed forces shelled the villages of Aghdam, Dondar-Gushchu, Vahidli and Alibeyli of Azerbaijan’s Tovuz district and deliberately attacked civilian targets. As a result, 12 Azerbaijani servicemen, including high-ranking officers, were killed, as well as a 76-year-old civilian was killed, numerous people were wounded, and serious damage to civilian objects, including private houses and hospitals, was done,” the appeal noted.

“In those days, radical Armenian groups committed aggressive actions against members of Azerbaijani communities abroad, peaceful Azerbaijani demonstrators protesting against the recent military provocation of the Armenian armed forces, as well as diplomatic missions of Azerbaijan in a number of foreign countries. The latest provocation by Armenia was committed in an area that has nothing to do with the occupied Nagorno-Karabakh region and adjacent regions of Azerbaijan, but close to strategic regional energy pipelines, including the Southern Gas Corridor (SGC), and the transport infrastructure of the Baku-Tbilisi-Kars (BTK) railway,” added the appeal.

“Armenia also openly attempted to expand the scale of the confrontation and bring the unresolved Armenian-Azerbaijani conflict to a new level of tension. To this end, immediately after the clashes, Yerevan turned to the Collective Security Treaty Organization (CSTO), the military-political union, of which Armenia is a member,” said the appeal.

“After fierce fighting in mid-July, the situation on the state border between Armenia and Azerbaijan has remained unstable. The Armenian army continues to fire at the Azerbaijani side and commit provocative actions that could aggravate the situation again. Recently, while trying to make a provocation in Azerbaijan’s Goranboy district by a sabotage reconnaissance group of the Armenian army, its commander was detained by servicemen of the Azerbaijani army,” stressed the appeal.

“Yerevan continues to openly violate its international obligations and uses every opportunity to illegally resettle Armenians to the occupied territories of Azerbaijan. The Armenian leadership regarded the recent explosion in Beirut as a pretext for the illegal placement of Armenians in the occupied Nagorno-Karabakh and seven adjacent districts. Thus, the leader of the separatist regime, created in the occupied Azerbaijani territories, proposed to resettle 150 Armenian families from Lebanon to Nagorno-Karabakh, and according to information disseminated by the Armenian Public Radio, several Armenian families from Lebanon have already settled there," the appeal said.

“For many years Armenia continues to illegally resettle Armenians from some Middle East countries to the Nagorno-Karabakh region and adjacent regions of Azerbaijan. The fact of illegal settlement by Armenia is also reflected in the relevant reports of the OSCE fact-finding missions. The illegal resettlement of Armenians to Nagorno-Karabakh is part of the policy of annexing Armenia under the pretext of "repatriation" and "humanitarian aid". Attempts to pursue an illegal settlement policy and purposefully change the demographic composition of the occupied territories are a gross violation of international humanitarian law,” the appeal emphasized.

“Azerbaijan calls on the international community to condemn these actions of Armenia, and demand that the leadership of this country conduct negotiations from a position of goodwill to achieve a sustainable settlement of the Armenian-Azerbaijani Nagorno-Karabakh conflict, with full respect for the sovereignty and territorial integrity of Azerbaijan within its internationally recognized border level, pursuant to four UN Security Council resolutions 822 (1993), 853 (1993), 874 (1993) and 884 (1993), demanding the immediate withdrawal of the Armenian armed forces from the occupied territories of Azerbaijan,” said the appeal.

“Therefore, it is extremely important for the international community to condemn Armenia for its acts of aggression against Azerbaijan. Until the international community resolutely condemns the policy of aggression and occupation of Armenia and takes tough measures against the dangerous illegal actions of this country, the entire region will constantly face the risk of being drawn into destructive armed conflicts,” the appeal added.