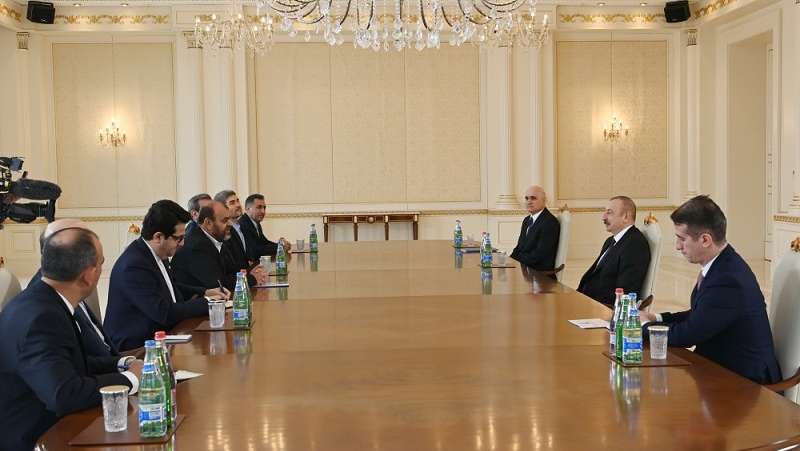 President of the Republic of Azerbaijan Ilham Aliyev has received a delegation led by Minister of Roads and Urban Development of the Islamic Republic of Iran, Co-Chair of the Iran-Azerbaijan State Commission on economic, trade and humanitarian cooperation Rostam Ghasemi, News.Az reports.

Minister and the Co-Chair of the State Commission Rostam Ghasemi extended Iranian President Seyyed Ebrahim Raisi’s greetings to the head of state.

President Ilham Aliyev thanked for Seyyed Ebrahim Raisi`s greetings, and asked the minister to extend his greetings to the Iranian President.

The sides noted that the new realities in the region created good opportunities for cooperation. They emphasized the importance of the Memorandum of Understanding to be signed today in the field of transport between the Government of the Republic of Azerbaijan and the Government of the Islamic Republic of Iran on the establishment of new communication links between the East Zangazur economic region of the Republic of Azerbaijan and the Nakhchivan Autonomous Republic through the territory of the Islamic Republic of Iran. The sides described this as a manifestation of friendly relations between the two countries, and expressed confidence that the signing of the document would contribute to the opening of new transport routes. They noted that the new corridor would be an important international corridor for both transport and electricity. It was emphasized that very important steps are being taken today to launch a new transport route, which will be a branch of the North-South Transport Corridor, and that this would create good grounds for cooperation in both East-West and North-South directions.

The Iranian companies’ involvement in the work in the liberated territories was hailed at the meeting.

The importance of bilateral cooperation between Azerbaijan and Iran in the field of transport for the two countries, the region, and at the international level was underlined during the conversation. The sides hailed the significance of launching flights in this regard.