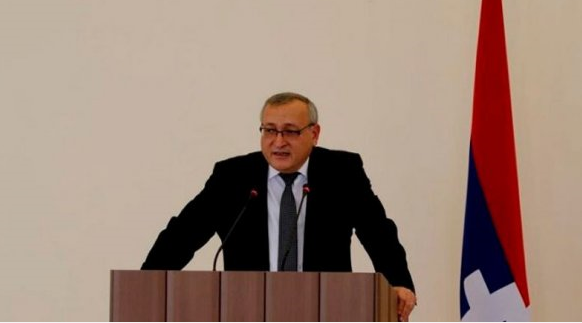 Representatives of the separatist regime operating in the territory of Azerbaijan, led by Artur Tovmasyan, who calls himself the “parliament speaker”, are on a visit to the Greek part of the Island of Cyprus, Armenian sources reported. During the visit arranged and sponsored by the Armenian National Committee of Cyprus, Tovmasyan reportedly met with Constantinos Yiorkadjis, Nicosia Mayor, Eleni Theocharous, Head of the so-called “friendship group” with the Armenian separatists in the Cypriot parliament, and Averof Neofytou, Head of the ruling DISY party (Democratic Rally).

There is a well-known saying in Greece – “an uninvited guest is called an “Armenian”.” But this time, Armenian guests can easily call themselves "invited" because they were officially invited to Cyprus.

Moreover, this is not the first time. Every time Azerbaijan receives similar responses as it protests against separatists’ visits to countries where strong Armenian lobbies operate. The response is that such visits are unofficial and of individual nature. However, this time it will not be possible to voice this answer as the visit took place by an official invitation. Eleni Theocharous, Head of the so-called “friendship group” with the Armenian separatists in the Cypriot parliament

As is known, at present, any illegal visits to Khankandi through the Lachin corridor are strictly limited and practically impossible. In the case of fixing such infiltrations, the Azerbaijani side demands explanations from the Russian peacekeeping contingent temporarily stationed in the territory of Azerbaijan. That is why recently there have been no reports of Cypriot representatives’ illegal visits to Khankandi. On the other hand, this fact does not show that the Greek part of this island has weakened its support for Armenian separatists.

But how can Azerbaijan respond to such provocations? Unlike other countries that facilitate such illegal visits by the separatist regime, Azerbaijan has much more leverage in Cyprus. Mostly, the matter is about potential ties with the unrecognized Turkish Republic of Northern Cyprus, which has existed in the Turkish part of the island for about 50 years.

If the leadership of Cyprus does not stop overlooking the contacts of its politicians and public figures with the so-called "regime in Khankandi", then what prevents Azerbaijan from strengthening relations with Northern Cyprus at various levels? Why don't the members of Azerbaijan’s Milli Majlis (parliament) visit Northern Cyprus from time to time?

In a case when not only deputies but also officials of Nicosia keep showing such a clear disrespect for the territorial integrity and sovereignty of Azerbaijan, Baku, in turn, has the right to believe that political obstacles to strengthening relations between Azerbaijan and the Turkish part of the island have now been eliminated. As is known, until now Azerbaijan has been extremely cautious in its contacts with Northern Cyprus in order, first of all, to prevent the Greek side from using this fact to justice its contacts with Armenian separatists.

But apparently, this approach no longer works. No matter how Azerbaijan adheres to the principles of international law, the Greek side does not want to sever its contacts with the separatists and continues to protect them. Given all hits, Baku should express its protests over the illegal visit of Karabakh separatists to Cyprus at the Foreign Ministry level.

To the attention of Greece!  The Greeks also suffered from Armenian vandalism. The population of the village of Mehmana, which is considered the territory of Kalbajar, consisted mainly of Pontic Greeks. The Greeks began to migrate to Azerbaijan in the 1930s. To be more precise, on May 23, 1930, the Georgian exarch appointed archpriest Vasily Andrianov to lead the religious community of Mehmana. During the occupation in 1993, the Armenian armed forces burned the whole village and drove the Greeks out of these territories. The Greeks, who had friendly co-existed with the Azerbaijanis in Karabakh for many years, became the victims of Armenian hatred and enmity and were expelled from the lands, where they had lived for years.

So it would be better to think twice when you make an “uninvited” guest, “invited”.