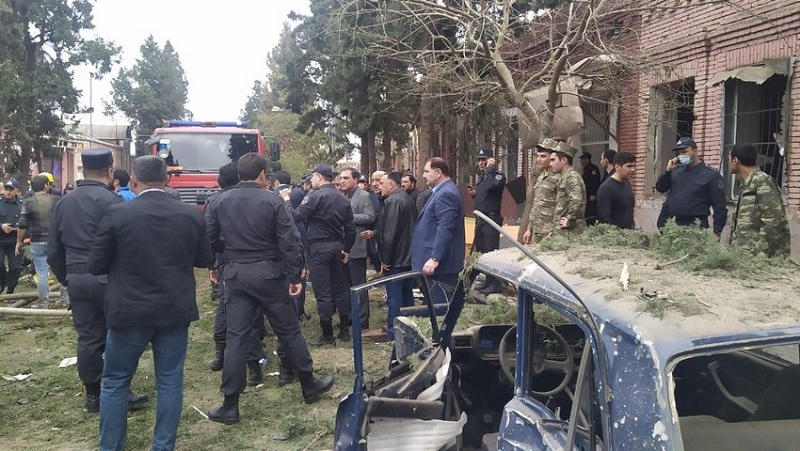 Azerbaijan’s Human Rights Commissioner (Ombudsperson) Sabina Aliyeva has issued a statement on the anniversary of casualties and destructions caused by the shelling of Ganja city and other areas of Azerbaijan by the Armenian armed forces, AzVision.az reports.

“The world community is well aware of severe violations of the ceasefire and international humanitarian law (IHL) committed by the Armenian armed forces since 27 September of 2020, which intensively fired densely populated civilian settlements and also social objects by using heavy artillery mounts, aviation, and specific rocket systems in order to realize another of their occupant policy against Azerbaijan, as a result of which innocent people were killed.

On this day, that is, on 4 October 2020, starting from early hours the armed forces of Armenia attacked from the prohibited munitions the city of Ganja, the second largest and densely populated city located far from the conflict zone, which is also a tourist center with ancient history and cultural objects.

On this day, Mingachevir city, where the largest hydroelectric power station and water reservoir in the South Caucasus are located, was also targeted by Armenia. On the same day, Khyzy and Absheron, which were located far away from the area of active hostilities, were also chosen by Armenia as a target.

The Armenian armed forces deliberately and in a targeted manner shelled the populous settlements in Beylagan, Tartar cities, Horadiz city of Fuzuli, Barda, Aghdam, Aghjabedi, Jabrayil, and other densely populated civilian objects from the heavy artillery and missiles.

As a consequence, there were many killed and wounded among the peaceful population; civilian objects, historic monuments and cultural property, administrative buildings, and other social objects were heavily damaged.

After those attacks, we conducted on-site investigations and the findings have been documented and addressed to the international community as a report.

Unfortunately, I would like to note that the military-political leadership of Armenia, which committed war crimes in gross violation of the norms and principles of international law, including provisions of the UN Charter, as well as the IHL norms, including the Geneva Conventions, in particular the Convention Relative to the Protection of Civilian Persons in Time of War of 12 August 1949, Hague Convention for the Protection of Cultural Property in the Event of Armed Conflict of May 14, 1954, and other documents on human rights, has not yet been held accountable and prosecuted for serious crimes.

The lack of serious measures to prevent the war crimes committed by the aggressor Armenia and to punish the perpetrators by the influential international organizations and international courts has led to the commission of new crimes against humanity.

On the eve of the anniversary of those events, which resulted in numerous casualties and are tragic not only for the people of Azerbaijan but also for humanity, once again appealing to the world community and international organizations, I call on them to strongly condemn war crimes accompanied by gross violations of international law, as well as of IHL and resulted in the killing of civilians, and to push for decisive steps to bring the Armenian military-political leadership to justice.”

This statement is addressed to the UN Secretary-General, UN Security Council, UN Office of High Commissioner for Human Rights, UN Office of High Commissioner for Refugees, UN Human Rights Council, the United Nations Children’s Fund, the United Nations Educational, Scientific and Cultural Organization, European Union, Council of Europe, Organization for Security and Co-operation in Europe, International and European Ombudsman Institutions, Asian Ombudsman Association, Organization of Islamic Cooperation and the Ombudsman Association of its member states,  Independent Permanent Human Rights Commission of the Organization of Islamic Cooperation, European Network of Ombudspersons for Children, International Peace Bureau, different ombudsmen and national human rights institutions, embassies of the Republic of Azerbaijan in foreign countries and the foreign embassies in Azerbaijan, as well as to the Azerbaijani Diasporas.