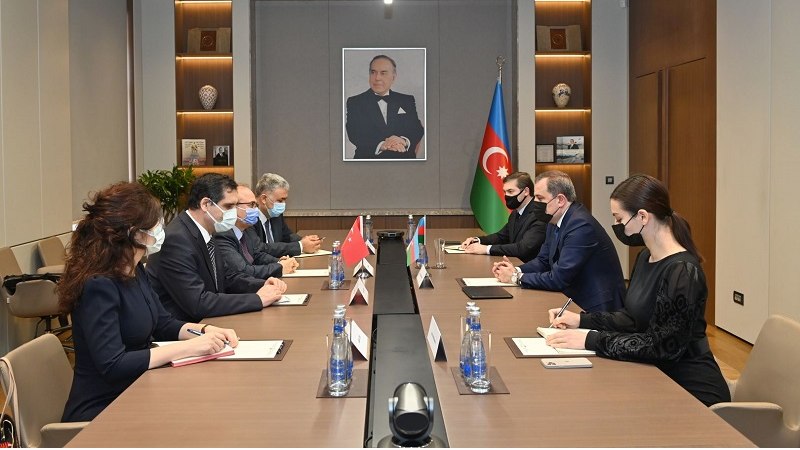 During the meeting, Minister Bayramov noted with satisfaction the rich, wide, and close friendly relations between Azerbaijan and Turkey.

Speaking about the former Armenia-Azerbaijan Nagorno-Karabakh conflict, the biggest and most painful problem faced by our country since the first days of independence, the Minister said that brotherly Turkey has always supported Azerbaijan's just position based on international law, and stressed that Azerbaijan highly appreciates the solidarity and moral support shown by Turkey at all levels, including by the people of Turkey, especially during the 44-day Patriotic War. He said that during this period of historical significance for Azerbaijan, the Azerbaijan-Turkey brotherhood and unity once again clearly demonstrated that "one nation, two states" is not in words but in deeds. As noted by the President of Azerbaijan, it was stressed that the right policy is behind these close relations between the sides.

Birol Akgun thanked Minister Bayramov for this courtesy meeting. He noted that the liberation of the territories of Azerbaijan from the occupation of Armenia excited all the people of Turkey, stressed that the news of the victory was greeted with great joy, and asked God to bless all the martyrs who died for the territorial integrity of the country. B.Akgun noted that the friendly relations between the leaders of the two countries made a significant contribution to the development of bilateral relations. He referred to the post-war period of construction and development, emphasizing the importance of education in this regard. He expressed readiness to provide relevant assistance to our country in the future development of education in the liberated territories.

The sides noted the importance of further developing the existing cooperation between the two countries in all areas.