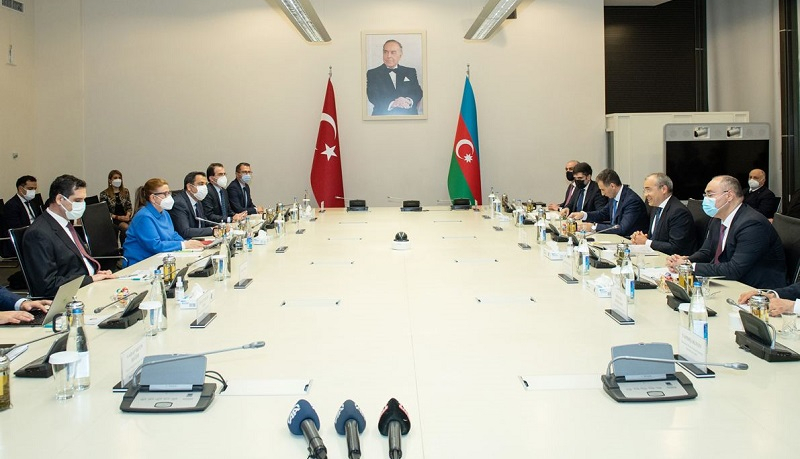 Azerbaijan's Ministry of Economy hosted a meeting with a Turkish delegation headed by Turkey’s Minister of Trade Ruhsar Pekcan as part of her visit to Azerbaijan, according to the ministry.

In the course of the meeting, Azerbaijani Minister of Economy Mikayil Jabbarov stressed that cooperation between the two countries is successfully developing in accordance with the principle of the National Leader of the Azerbaijani people Heydar Aliyev - ‘One nation, two states’.

“Azerbaijan and Turkey are united by common interests and values, the countries are always close to each other as the closest strategic allies in the world, and a vivid example of this was the strong political and moral support of Azerbaijan from Turkey during the 44-day Second Karabakh War,” the minister said.

“Turkey and Azerbaijan are also actively cooperating within the framework of international organizations. Sincere fraternal relations between the heads of state, the great importance they attach to the expansion of the partnership, contribute to the deepening of ties,” Jabbarov stressed.

The economy minister also noted that the 9th meeting of the Azerbaijani-Turkish intergovernmental commission held in Turkey in February 2021 is a favorable platform for the development of cooperation.

Besides, Jabbarov emphasized that the measures taken to expand multifaceted cooperation between Azerbaijan and Turkey will contribute to the implementation of new joint projects and the development of trade and economic relations.

In turn, Ruhsar Pekcan spoke about the prospects for expanding Azerbaijani-Turkish economic ties, noting that Turkish companies are interested in participating in construction projects in the territories of Azerbaijan liberated from Armenian occupation following the 44-day Armenia-Azerbaijan Second Karabakh War from late Sept. through early Nov.2020.

Minister of Transport, Communications and Information Technologies Rashad Nabiyev, Chairman of the State Customs Committee Safar Mehdiyev, Minister of Economy of the Nakhchivan Autonomous Republic Tapdyg Aliyev, who took part in the meeting, shared their views on expanding ties between the two countries in the field of transit and logistics, customs, ICT, trade, development directions economic ties in accordance with the new realities that have arisen after the liberation of Azerbaijani lands from Armenian occupation.

During the meeting, the participants spoke about the impact of the coronavirus pandemic on the country's economy, as well as the role of mutual support in the fight against COVID-19.

The parties also discussed issues of strengthening economic ties between the two countries, expanding the scope of the Agreement on Preferential Trade between Azerbaijan and Turkey, mutual increase in trade and assortment, as well as other issues.