Azerbaijan's DefMin: "Measures on combat readiness must be held at a high level, tasks must be accomplished promptly" 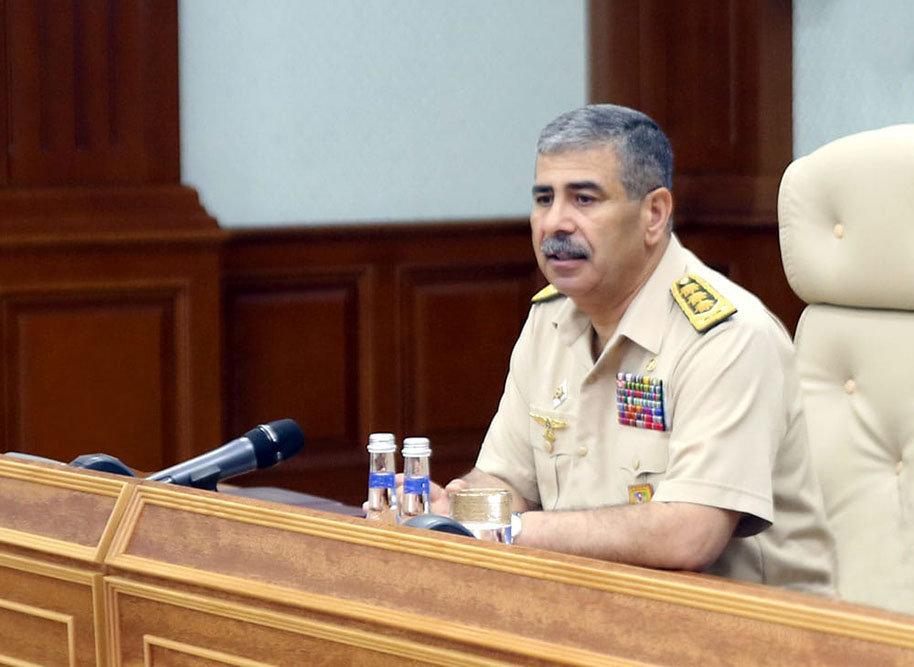 On August 13, the Minister of Defense, Colonel General Zakir Hasanov held an official meeting with Deputies of the Minister of Defense, Commanders of types of troops, Chiefs of Main Departments, Departments, and Services of the Ministry at the Central Command Post. Commanders of the Army Corps and formations stationed in the liberated territories were also involved in the meeting via video teleconference, News.az reports citing Azerbaijan's Ministry of Defence.

The Minister of Defense delivered to the meeting participants the tasks assigned to the Azerbaijan Army by the President of the Republic of Azerbaijan, Supreme Commander-in-Chief of the Armed Forces, Mr. Ilham Aliyev, as well as the requirements and tasks on maintaining combat readiness at a high level.

At the meeting, the "Revenge" retaliatory operation conducted by Azerbaijan Army Units was extensively analyzed. Colonel General Z. Hasanov gave instructions regarding the current operational situation on the Azerbaijani-Armenian state border, as well as on the territory of Azerbaijan, where the Russian peacekeeping contingent is temporarily deployed.

The Minister has set specific tasks for the officials to solve the issues arising from the commissioning of the newly built road for the use of the Lachin corridor.

The Minister of Defense instructed to improve the daily combat and service activities of the troops, as well as the quality of the conducted exercises and the practical skills of military personnel, in order to maintain the level of combat readiness of the units at a high level.

After hearing the officers’ reports on the winter preparatory work carried out in the troops, Colonel General Z.Hasanov gave relevant instructions on paying special attention to the units, stationed in mountainous areas, and organizing high-level preparation of military equipment and weapons for seasonal operation.

Speaking about discipline and the moral-psychological state of the military personnel, the Minister of Defense emphasized the importance of measures taken to organize teaching and educational work. Defense Minister emphasized the significance of conducting educational talks on the protection of information security, including the unacceptance of the dissemination of sensitive information, military and state secrets in social networks. The Minister instructed to continue decisive measures against those who grossly violate the requirements of Army regulations and relevant orders.

At the end of the meeting, Colonel General Z.Hasanov, emphasizing strict compliance with safety rules in daily service activities, once again highlighted the importance of continuing the necessary measures on protecting the health of servicemen, further improving the troops’ service and social and living conditions, as well as engineering support and ordered to promptly fulfill all the assigned tasks.