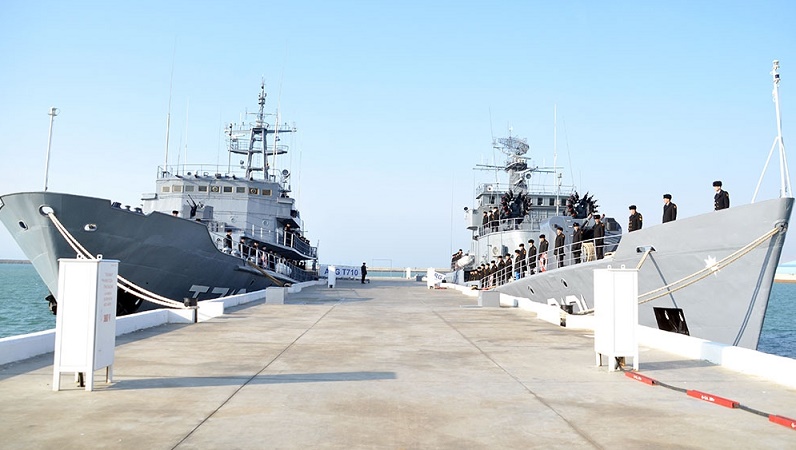 The ship crews were put on alert and brought to the state of combat readiness, the commanders' practical skills in prompt decision-making and the use of force during the battle, as well as combat and tactical-special training of military personnel, were inspected.

Colonel General Karim Valiyev was provided with detailed information about the deployment of warships and accommodation of ship crews, combat readiness, and organization of watchkeeping service, as well as other issues.

As he visited the Hydrographic Department and the Training and Educational Center of the Naval Forces, the Chief of the General Staff inquired about the organization of the service and the social and living conditions of the servicemen.

Then an official meeting on the results of a comprehensive inspection was held with the participation of officers of the relevant Main Department, Department of the Ministry of Defense, and the Naval Forces command.

Analyzing the work done, Colonel General Karim Valiyev positively assessed the readiness of warships and ship crews, as well as stressed that these achievements were gained due to the attention and care of the President of Azerbaijan, Commander-in-Chief of the Armed Forces, Ilham Aliyev. It was noted that during the Patriotic War the military personnel of the Naval Forces successfully fulfilled the tasks assigned by the Commander-in-Chief and demonstrated high professionalism in combat operations conducted to liberate the lands from occupation.

The Chief of the General Staff gave relevant instructions on preparing for the exercises to be held this summer in the Azerbaijani sector of the Caspian Sea, as well as on paying special attention to the selection of marines, improving their knowledge and skills, and other issues.

Colonel General Karim Valiyev delivered the instructions of the Minister of Defense to the command staff on further increasing the level of combat and moral-psychological training of the Naval Forces, strengthening military discipline, as well as on issues of logistic support.