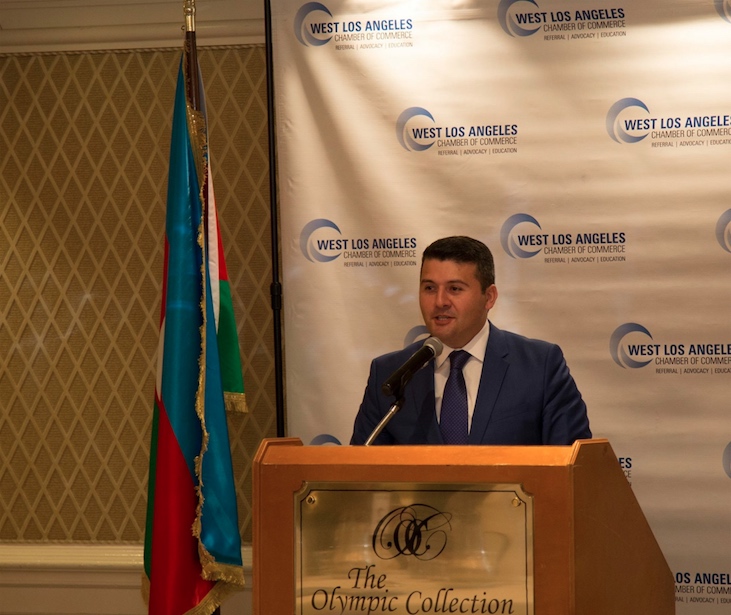 Considered one of the most influential chambers of commerce in California, the WLACC has over 1250 members representing many renowned companies, including some of the nation's largest corporate entities. Previous speakers of the WLACC included Los Angeles Mayors, members of U.S. Congress, California state elected officials and others.

In his presentation, the Consul General spoke of Azerbaijan's path to independence and its rapid development as a free and independent nation since 1991. Aghayev informed the participants about the economic reforms undertaken in the country and current efforts by the Government to diversify the economic development even more vigorously into such areas as tourism, IT, agriculture and transportation, among others, which are already beginning to produce positive results, strengthening Azerbaijan's position as the largest economy in the South Caucasus region.

Highlighting Azerbaijan's role in implementing projects of regional and trans-regional importance and magnitude, the Consul General spoke of the Baku-Tbilisi-Kars railroad that was inaugurated on October 30, 2017 and that is set to connect China with Europe through the shortest and most reliable route.

The Consul General also informed the audience about the illegal military occupation and ethnic cleansing of around 20% of Azerbaijan's sovereign territory by neighboring Armenia. He noted that this illegal occupation and the ongoing conflict with Azerbaijan has only damaged Armenia's well-being over the last 26 years of its independence, making it the weakest economy of the South Caucasus. "Since 1991, Armenia has lost a million of its population to economic emigration," Aghayev said, adding that integration of Armenia into the large-scale regional projects involving Azerbaijan and the other South Caucasian nation - Georgia, would only be possible once Armenia leaves the occupied territories of Azerbaijan, allowing hundreds of thousands of Azerbaijani displaced population to return to their homes and lands.