Azerbaijanis preserve this for Armenians 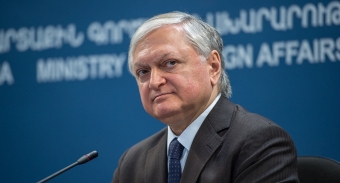 What can one expect from simply inadequate inhabitants of the planet who have chosen to "steal and suffer a lot" for their life credo, if their leaders say such an irresponsible heresy that hurts ears. God be with them, if their nonsense did not go beyond the walls of their own apartment or office, but no. They strive to show their stupidity to the whole world from high tribunes. And they do it quite successfully.

One of such "priests", however not distinguished by virtue and piety, is Armenian Foreign Minister Edward Nalbandian. So, according to vesti.az, yesterday he took part and spoke at the 39th UNESCO General Conference in Paris.

According to the press service of the Armenian Foreign Ministry, in his speech, the foreign minister touched upon the main goals of the organization,  Armenia’s role in the adoption of a number of important initiatives, both in the UN and UNESCO. But not these protocol points were Nalbandian's main goal. It was obvious that the main task of the Armenian Foreign Minister was to shed as many tears as possible on the rostrum, and to 'expose the offenders’ of the suffering Armenian souls - Azerbaijan and Turkey.

"Education is an important tool in promoting the values of this organization. Unfortunately, some states use education as a means of spreading ethnic hatred, especially among the younger generation. There are many examples of this in Azerbaijani textbooks. One of them teaches children that Armenians are their genetic enemies. The political leaders of Azerbaijan, educational institutions and media continue to spread hatred towards Armenians, bringing up an entire generation of Azerbaijanis in the rhetoric of hatred," Nalbandian noted.

First, these textbooks speak about  not Armenians but Armenian OCCUPANTS who captured 20 percent of Azerbaijani lands. Or does Nalbandian consider that the occupiers and Armenians are generally identical concepts?

Second, should we write that amiable Armenians committed the Khojaly genocide with the best of intentions? Or apologize to them for it?

As for the question of genetics, it would be better for Edward to remain silent and not to stutter about it. Did the Armenian FM forget the words of the former president of this politico-geographical cartoon Robert Kocharyan? If he forgot, we will refresh his memory.

Being Armenian President Kocharyan ones issued a gem, which is worthy to take its place in the list of the most stupid sayings: "Armenians and Azerbaijanis are genetically incompatible". A thesis in the spirit of fascist ideology of Hitlerite Germany.

"After ethnic cleansing against the Armenian population of Azerbaijan, Baku has now set itself the goal of destroying the memory of the many thousands-year-old presence of Armenians, any trace of Armenian culture and history in the region. Baku erases the past for the reason that it does not correspond to the reality invented in Azerbaijan.

“Those who control Azerbaijan today believe that they can retell the story anew, in order to legitimize their policy of intolerance, " Nalbandian said.

Interestingly, Baku alone accounts for nearly 30,000 or  maybe even more Armenians, and no one is going to "ethnically cleanse" them. A "many thousands-year-old" presence of Armenians in Azerbaijan, in particular in Nagorno-Karabakh, was featured on the obelisk in Maragha. It was installed in 1978 in honor of ... the 150th anniversary of the resettlement of first 200 Armenian families. The obelisk was safely demolished by the Armenians themselves. They could have added three zeros, but they did not. Whatever it was, 150 years is not even close to many thousands of years, no matter how you drag by the ears.

"Our neighbors show different attitude to the preservation of cultural heritage. There is good cooperation with Iran, where authorities take proper care of Armenian monuments, unlike neighboring Azerbaijan, as well as Turkey, where numerous monuments have been lost forever," he said, brushing off a mean and not a man's tear.

Nalbandian has a heart to speak about vandalism, after Azerbaijani cemeteries in Armenia were demolished, and Azerbaijani mosques in Nagorno-Karabakh were destroyed. As for the Armenian church in the center of Baku, it stands to this day, and is protected by the law.

And the most important thing. The Azerbaijanis have preserved the greatest attraction, which was given to us by "good Samaritans" in the person of Armenians. This is the city of Baku. Or does somebody doubt that Baku is an ancient "Armenian" city? So, Azerbaijanis reverently preserve the main Armenian artifact. Though, not always. But that's yet another story ...