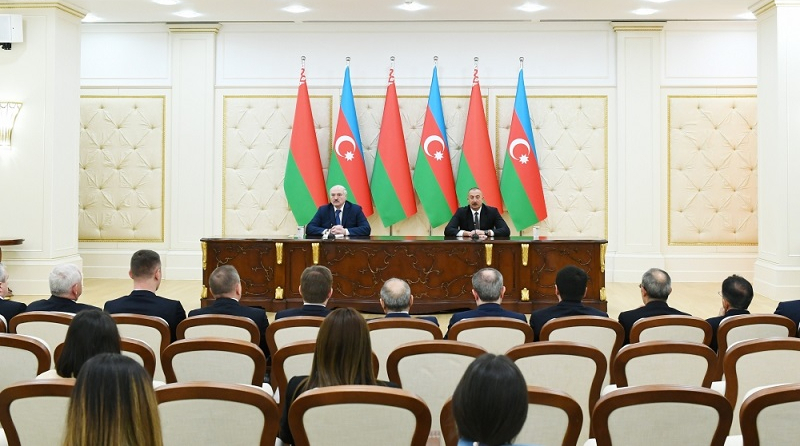 The Zangazur corridor is becoming a reality, Azerbaijani President Ilham Aliyev said in a press statement following a meeting with his Belarusian counterpart Alexander Lukashenko in Baku on Wednesday.

The head of state noted that the overall situation related to post-conflict development can be described positive.

“I have informed Alexander Grigorievich about our approaches and our vision of the development of the post-conflict situation. Naturally, I have expressed Azerbaijan’s position that we believe, and the reality is, that the Nagorno-Karabakh conflict has now been resolved. Azerbaijan has resolved it on its own, implemented four UN Security Council resolutions which remained on paper for 27 years but, unfortunately, the mechanism for their implementation was not used,” he said.

President Aliyev stressed that the messages the Minsk Group co-chair countries sent to the Armenian side to end the occupation were also not fulfilled, while their statements that the status quo was unacceptable were not heard by the Armenian side.

The Azerbaijani leader noted that the culprit of what happened to Armenia is precisely the Armenian leadership, which had been leading the country to the abyss for 20 years.

“The former rulers of Armenia are the main culprits of this humiliating and complete defeat of the Armenian army with which the second Karabakh war ended. We want to turn the page, are focused on strengthening confidence-building measures, transport and logistical projects, which are being discussed today both within the framework of the Azerbaijan-Armenia-Russia trilateral working group at the level of deputy prime ministers and within the framework of our consultations with neighboring countries – Turkey and Iran. Thus, the Zangazur corridor is becoming a reality. We look forward to multilateral cooperation,” he added.