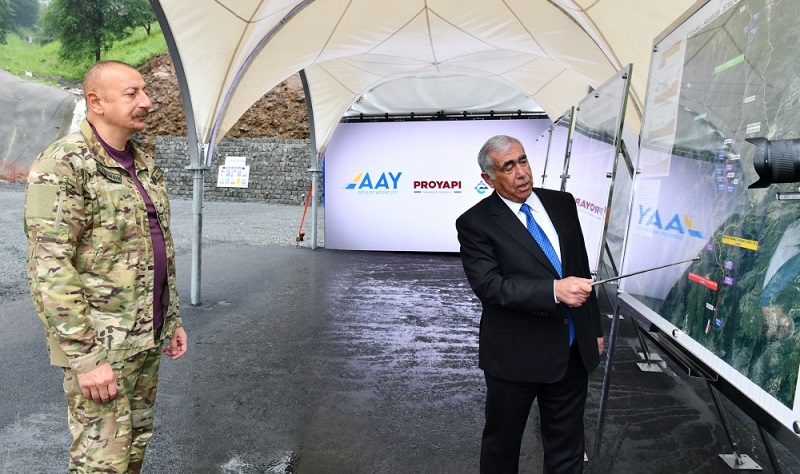 On June 26, President of the Republic of Azerbaijan Ilham Aliyev visited Goygol, Kalbajar and Lachin districts.

The head of state first got acquainted with the construction of two tunnels on the 13th kilometer of the Toghanali-Kalbajar highway in Goygol district.

Chairman of the Board of Azerbaijan Highway State Agency Saleh Mammadov informed the President of the construction work.

It was noted that the 2-4-lane highway connecting Goygol and Kalbajar districts is being built in accordance with the 1st, 2nd and 3rd technical degrees. In particular, taking into account the fact that the area where the road is crossing is made up of mountains and rocks, the main part of it will consist of two lanes, and additional lane will be constructed on the slopes. This road will have four lanes in tunnel and bridge sections.

It was noted that the Murov range starts from the 13.5th kilometer of the project. The height increases from 1,700 meters to 3,250 meters at the top of Mount Murov. In this part, the construction of the Murov tunnel, which will be one of the longest automobile tunnels in the world, is underway. Drilling of the tunnel has already reached a depth of 2.1 kilometers.

The tunnel is provided with a temporary ventilation system. The construction of two pedestrian and reserve motor crossings has been completed.

At present, the transportation of rock fragments generated as a result of blasting in the tunnel, the removal of produced water and lining of the inner part of the tunnel are underway.

The President was also informed that in addition to the Murov tunnel, three more tunnels will be built within the Toghanali-Kalbajar-Istisu highway construction project. Construction work has begun on the first tunnel, which is 542 meters long and 12 meters wide, and on the second tunnel, which is 607 meters long. Drilling has already been completed for the first layer of the first tunnel, enabling movement inside the tunnel. Drilling on the top layer in the second tunnel is nearing completion.

The Toghanali-Kalbajar-Istisu highway, the construction of which is expected to be completed before 2025, passes through the territory of Kalbajar district, originating from Toghanali village of Goygol district. Therefore, the road, along with many settlements in the district, will provide easy access to the city of Kalbajar and the famous Istisu area.