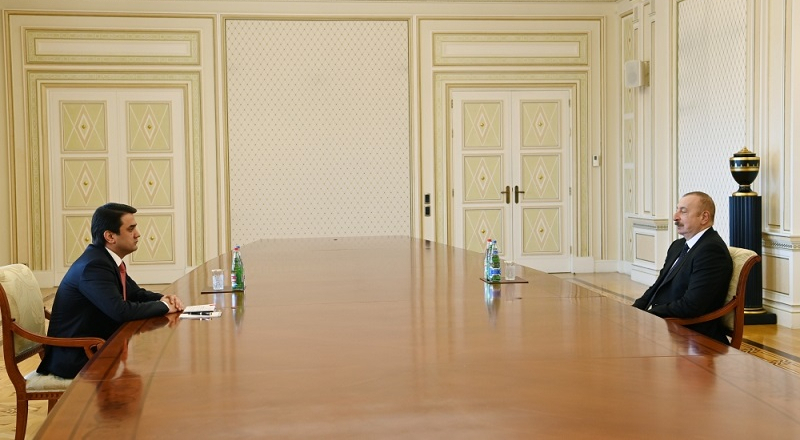 President Ilham Aliyev expressed his confidence that the Speaker of the Majlisi Milli of the Republic of Tajikistan Rustam Emomali’s visit would be fruitful and contribute to the strengthening of friendly relations between the two countries. Emphasizing that Azerbaijan and Tajikistan enjoy close cooperation in a number of areas, the head of state underlined the importance of his contacts with Tajik President Emomali Rahmon and mutual support to each other.

The head of state hailed the successful development of interparliamentary cooperation between the two countries, pointing out good prospects in the economic, transport and investment spheres.

Expressing his gratitude for the warm words, Speaker of the Majlisi Milli, Supreme Assembly of the National Parliament of the Republic of Tajikistan Rustam Emomali, first, extended Tajik President Emomali Rahmon’s greetings and best wishes to the President of Azerbaijan.

Noting that an agreement on cooperation between the two countries’ parliaments, as well as a sister-city document of Baku and Dushanbe will be signed, Rustam Emomali described this as a good indicator of friendly relations.

President Ilham Aliyev thanked for Emomali Rahmon’s greetings and asked the Speaker to extend his greetings to the Tajik President.