Azerbaijani president comments on position of Russia, Iran and U.S. on Nagorno-Karabakh conflict 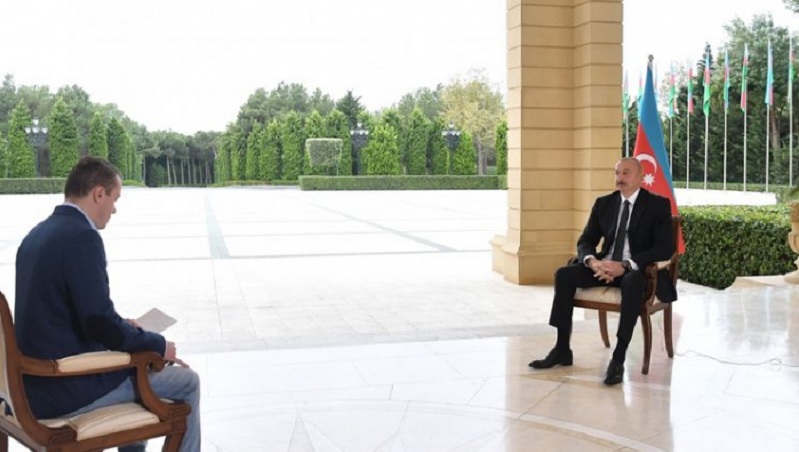 Azerbaijani President Ilham Aliyev commented on the position of Russia, Iran, and the United States regarding the Armenia-Azerbaijan Nagorno-Karabakh conflict.

Speaking to CNN-Turk television, President Aliyev said Russia carries out a mediation mission as a co-chair of the OSCE Minsk Group.

“We don’t have any problems with this issue. At the same time, Russia is the only country among three co-chair countries that is our neighbor,” he said.

The head of state noted that Azerbaijan and Russia have a long historical relationship.

“At present, Russia is developing relations with both Armenia and Azerbaijan. This is a very important fact. Therefore, there are no problems either in the bilateral format or within the framework of the Minsk Group,” he added.

As for Tehran’s stance on the conflict, President Aliyev said Iranian authorities have expressed support for Azerbaijan’s just cause.

“A couple days ago, Iranian official made statements calling for an end to the occupation of Azerbaijani territories. They also emphasized the importance of restoring Azerbaijan’s territorial integrity and ensuring the return of our IDPs to their ancestral lands,” the head of state said, calling Tehran’s position on the conflict ‘fair’.

Commenting on the position of the U.S., one of the Minsk Group co-chairs, regarding the conflict, President Aliyev said he has not had any contact with the U.S. president [Donald Trump]. However, senior US officials, of course, expressed their views on this issue and the ongoing developments. At the same time, Mr. Trump made a statement on this issue. I think it was a complete, logical statement,” he noted.

President Aliyev went on to say that Azerbaijan-U.S. bilateral relations continue to develop successfully. He stressed that Azerbaijan agrees with the U.S. position on the conflict.