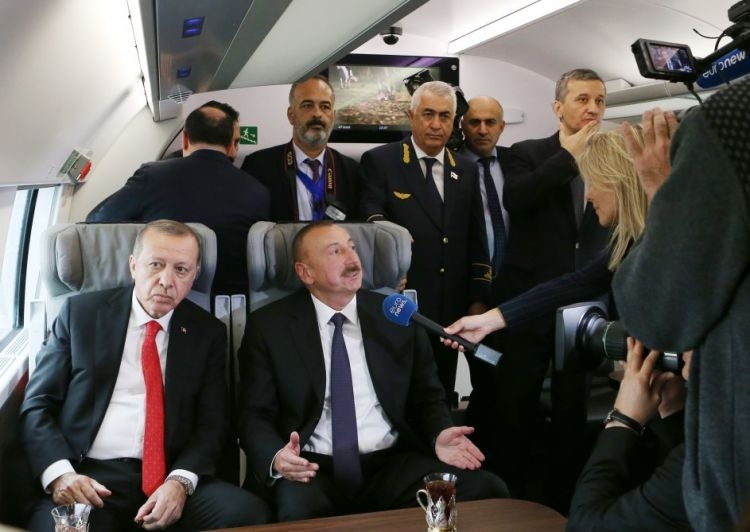 Euronews presented a story in its “Focus” program about the opening of the Baku-Tbilisi-Kars railway, APA reports citing Azertac.

Speaking about BTK, President of Azerbaijan Ilham Aliyev said thet rhere is no shorter way between Asia and Europe: “Our goal for the future is to agree on tariffs to make it economically attractive. In the long-term, the volume of cargo will grow, and of course this means big profits, big revenues, new jobs and cooperation.”

The head of state noted that this is a historic event: “This route connects continents, Eurasia. This is the shortest way between Asia and Europe. Azerbaijan, together with Turkey and Georgia, has actively participated in its construction. I’m very pleased that we – Turkish president, Georgian, Kazakh, Uzbek PMs, ministers from Turkmenistan and Tajikistan - are marking this event.  Their participation shows how this project is significant. This is the shortest and most reliable route. This route will bring prosperity, stability and development to whole region. We expect the freights to increase 17 million tonnes. Volume of cargos will increase in the near perspective. Of course, this means a large amount of income,  new jobs and cooperation. I this route is of great importance in terms of economy. All countries along the route will benefit from it”.

Recep Tayyip Erdogan said that this railway was carried out as a significant strategic investment: “It became the most serious investment of the Silk Road. Some had doubts about successful implementation of this project. This route is of great importance in terms of both cargo and passenger transportation. You know that the railway system competes with sea transport system on freightage in terms of expenses. Financial expenses via this route are less than sea transport. It also has a low risk of accident”.

In turn, Georgian PM Giorgi Kvirikashvili noted that the project also connects nations of these countries: “The closer integration and cooperation is, the higher economic, trade growth, security will be in and outside the region. The BTK is really s strategic project because it connects Turkey, Georgia and Azerbaijan, which are strategic partners. Participation of our friends and brothers - Kazakh, Uzbek PMs, ministers from Turkmenistan and Tajikistan – in this project shows its significance and this project practically develops whole continent."