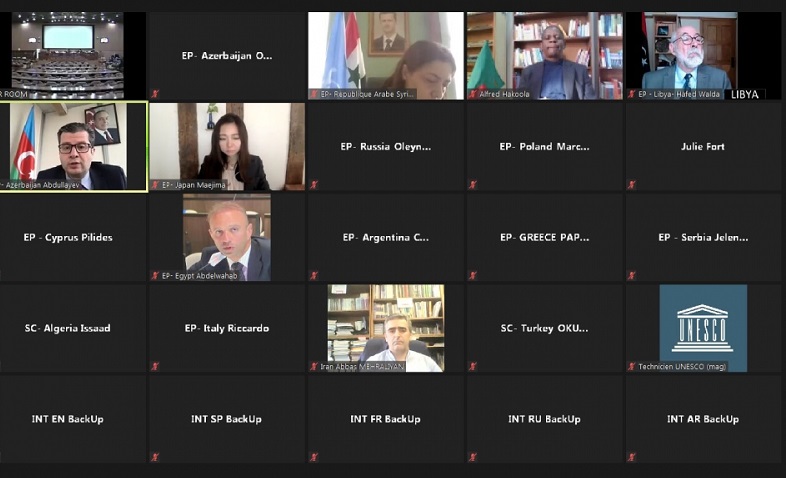 Permanent delegate of Azerbaijan to UNESCO, Ambassador Elman Abdullayev has delivered a declaration on behalf of the Non-Aligned Movement (NAM) at the Sixth Meeting of States Parties to the 1970 Convention.

The declaration reads: “It is a great honor for the Republic of Azerbaijan, in its capacity as the Chair of the Non-Aligned Movement, to take the floor at the Sixth Meeting of the States Parties to the 1970 Convention on the Means of Prohibiting and Preventing the Illicit Import, Export and Transfer of Ownership of Cultural Properties on behalf of NAM/UNESCO Chapter.

The members of NAM express their concern over the problem of illicit trafficking of cultural property, which not only affects countries of origin but also disrupts the safeguarding of heritage everywhere. In this regard, NAM wishes to stress the importance of the effective implementation of relevant international treaties, in particular the 1970 Convention and the 1995 UNIDROIT Convention on Stolen or Illegally Exported Cultural Objects.

The NAM underlines the importance of national, regional and international initiatives for the protection of cultural property, in particular the work of UNESCO and 1970 Convention, and stresses the importance of fostering international law enforcement cooperation to combat trafficking in cultural property and in particular the need to exchange information and experiences in order to operate in a more effective way.

The NAM underlines the role of UNESCO in sensitizing public about the seriousness of the problem, bringing together all stakeholders in combatting the illicit trafficking of cultural property and assisting its Member States in putting in place sustainable measures to tackle this global problem.

“Considering that the protection of cultural heritage can be effective only if organized both nationally and internationally among States working in close co-operation”, as indicated under the preamble of the 1970 Convention, the NAM invites all Members of UNESCO to engage into dialogue, in good faith, on all matters related to return and restitution cultural property. On this subject, NAM stresses the potential role that the Intergovernmental Committee for Promoting the Return of Cultural Property to its Countries of Origin or its Restitution in case of Illicit Appropriation (ICPRCP) can play.

Taking the above-mentioned into account, the NAM urges UNESCO to increase its efforts in ensuring the application of respective standard-setting instruments and mechanisms, as well as in creating platforms for global dialogue.”