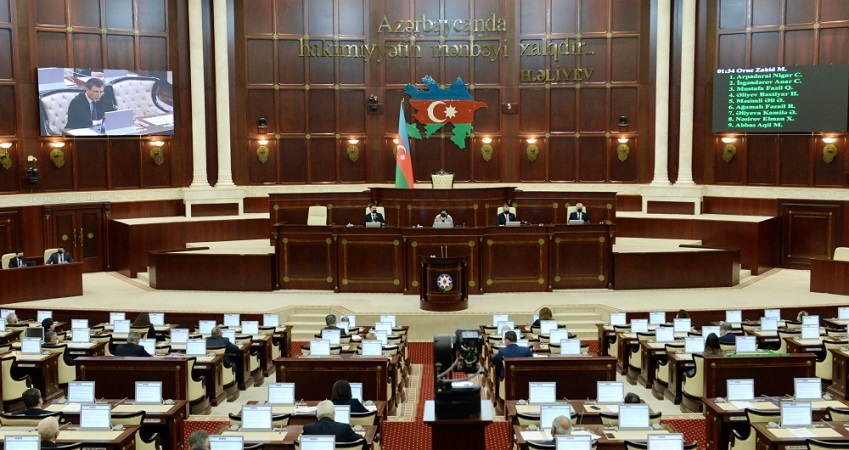 In its session on 26 November, the Milli Majlis (Parliament) of the Republic of Azerbaijan has adopted a statement regarding the biased resolution of the French Senate.

The Milli Majlis of the Republic of Azerbaijan declares the following in connection with the resolution adopted by the Senate of the French Republic on 25 November 2020 at the instigation of various Turkophobic and Islamophobic political circles and Armenian ethnic groups operating in France:

• The existence of a puppet organization called the “Nagorno-Karabakh republic”, illegally established by the Armenian armed forces in the occupied territories of the Republic of Azerbaijan in 1988-1994 and not recognized by any state, was terminated in November 2020;

• The recognition by the French Senate of this puppet body is an attempt to incite the French Government to violate the fundamental norms and principles of international law;

• This step by the French Senate is inconsistent with the commitments of the French Republic in the framework of the EU's global foreign and security policy, including the documents adopted by the Council of the European Union on the territorial integrity of states since 2016;

• The implementation of provisions of this resolution has the potential to deal a crushing blow to the European Union and its Eastern Partnership program;

• One of the main reasons why the Armenia-Azerbaijan Nagorno-Karabakh conflict, which posed a threat to the security of the South Caucasus and Europe as a whole, had not been resolved for nearly 30 years, is that the states playing the role of international mediators in peace talks, France in particular, did not refer to the aggressor by its name and treated the aggressor and the victim of aggression in the same manner;

• Encouraged by the support of foreign forces interested in continuing instability in the South Caucasus, Armenia, seeking to disrupt the peace talks once and for all and legitimize the occupation of Azerbaijani lands, launched another provocation against Azerbaijan on 27 September 2020, but a 44-day counter-offensive launched by Azerbaijan, which exercised its right to self-defense under Article 51 of the UN Charter, forced the aggressor state of Armenia to sign for peace;

• The resolution of the French Senate made baseless and false allegations that Turkish forces were involved in Azerbaijan’s counter-offensive, mercenaries from some conflict zones in the Middle East were being used against Armenia and war crimes being committed against civilians in Nagorno-Karabakh, but provided no evidence of the above whatsoever;

• However, there are indisputable facts that chauvinist, racist and terrorist mercenaries from foreign countries, including France, were brought to the war zone and used against Azerbaijan, committing serious war crimes against civilians in Azerbaijani settlements located far from the zone of military action;

• The Armenian armed forces committed a number of massacres against peaceful Azerbaijanis during the war of aggression against Azerbaijan in 1992-1994, including the Khojaly genocide, one of the most horrific tragedies of the 20th century;

• The French Republic, which considers itself an “example” of respect for human rights and democratic values, has chosen to remain silent in the face of these crimes against peaceful Azerbaijanis;

• During the colonial rule, the French armed forces massacred hundreds of thousands of civilians because of their ethnicity and religion. The genocide committed is a black mark on the political history of France that cannot be erased;

• The trilateral statement signed by the presidents of Azerbaijan, Russia and the prime minister of Armenia on 10 November 2020 put an end to the 30-year-old Armenia-Azerbaijan Nagorno-Karabakh conflict and the occupation of Azerbaijani lands, and paved the way for future development of the South Caucasus. This trilateral statement established the supremacy of norms and principles of international law, Resolutions 822, 853, 874 and 884 adopted by the UN Security Council in 1993 and supported by the French Republic, UN General Assembly Resolution 62/243 adopted in 2008, has ensured the implementation of resolutions and documents adopted by the European Union and the European Parliament, the Parliamentary Assembly of the Council of Europe, the Organization of Islamic Cooperation, the Non-Aligned Movement, the European Court of Human Rights and other authoritative international bodies.

1. To appeal to the OSCE leadership to recall the French Republic from the OSCE Minsk Group Co-Chairs, because its neutrality has been questioned due to its position and statements in recent days;

2. To reconsider the existing political relations between the Republic of Azerbaijan and the French Republic;

3. To deeply analyze the existing economic relations between the Republic of Azerbaijan and the French Republic and take necessary measures.