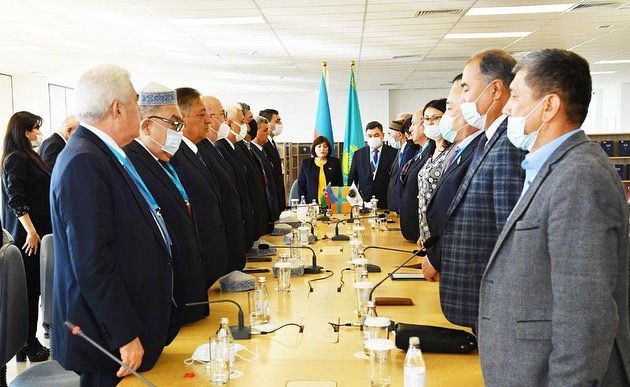 The parliamentary delegation led by the chairman of the Azerbaijani Parliament Sahiba Gafarova, which is on a working visit to Kazakhstan, took part in an event dedicated to Azerbaijan's Day of Remembrance, held on in Turkestan.

At first, the memory of the martyrs of the 44-day Second Karabakh War was honored with a minute of silence.

The President of the International Turkic Academy Darkhan Kydyrali, who opened the event, said that as a result of the war that began a year ago, on September 27, Azerbaijan liberated its lands from Armenian occupation. He mentioned his visit to the Azerbaijani city of Shusha and touched upon the role of this beautiful city in the culture and art of Azerbaijan.

Gafarova made a speech at the event. According to her, the valiant Azerbaijani soldiers liberated the lands of Azerbaijan and restored the country's territorial integrity at the cost of their lives. The Azerbaijani army under the leadership of the Victorious Supreme Commander-in-Chief, President Ilham Aliyev, inflicted crushing blows on the Armenian Army, forcing it to sign an act of surrender. The Azerbaijani people will always keep the precious memory of the martyrs, whose names are forever inscribed in the history of Azerbaijani statehood, she said.

She emphasized that the Karabakh conflict has already become a part of history, and Azerbaijan is restoring the liberated territories. The speaker of the Azerbaijani parliament drew the attention of the audience to the fact that Armenia, which during almost 30 years of occupation destroyed cities, villages, historical and cultural monuments, mosques on Azerbaijani lands, continues to interfere with the establishment of stability in the region and still does not stop its provocative actions.

The end of the event was marked by the presentation of two works of Nizami Ganjavi - "Seven beauties" and "Leyli and Majnun", prepared by the International Turkic Academy, into the Kazakh language. Gafarova expressed her gratitude to the leadership of the International Turkic Academy for the translation into Kazakh and the publication in the form of books of these two poems by Nizami Ganjavi. She expressed hope that the rest of the works of the brilliant Azerbaijani poet will be translated into Kazakh and wished the Academy every success.