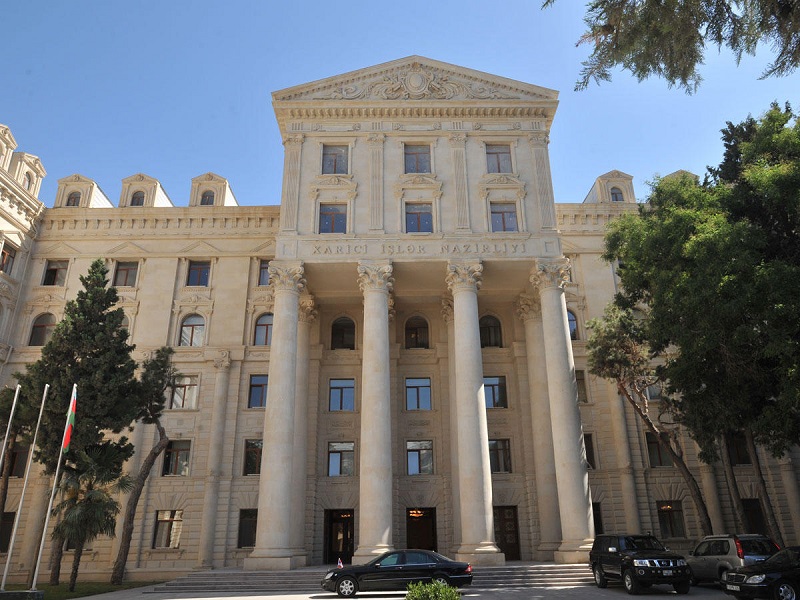 Azerbaijan strongly refutes claims by the Armenian National Commission for UNESCO about a 'cultural crime' that was committed in Azerbaijan's Jabrayil city.

The ministry was commenting on a recent BBC News report, echoed by the Armenian National Commission for UNESCO about the ‘disappearance of an Armenian church’ in the Azerbaijani town of Jabrayil.

The biased video report shows the 'disappearance' of a building, presented as a church in Jabrayil, which was recently liberated from the Armenian occupation.

"The Republic of Azerbaijan has repeatedly affirmed its commitment to protecting culture and religious diversity, and it remains unchanged. The alleged ‘disappearance’ must be put in context. The chapel was illegally built during Armenia’s nearly thirty-year occupation of these lands, that are internationally recognized being part of Azerbaijan, and that was solely populated by ethnic Azerbaijanis prior to the occupation in 1993," the ministry said.

"The chapel was constructed during a period when Armenia was destroying the homes and cultural heritage of Azerbaijanis that had lived in Jabrayil and other occupied regions of Azerbaijan for generations," the statement said.

In 2017, the ministry noted, following the Republic of Azerbaijan’s appeals to the Organization for Security and Co-operation in Europe (OSCE), Co-Chairs from the OSCE Minsk Group agreed to visit the chapel in Jabrayil.

Azerbaijan also raised grave concerns that the Armenian forces were altering the demographic, cultural and physical character of the occupied territories of Azerbaijan.

"Following their visit, the OSCE Minsk Group Co-Chairs concluded that the chapel had been built as part of a military compound in Jabrayil for use by Armenian soldiers. The chapel cannot be considered a part of Jabrayil’s cultural history when its construction, reportedly only five years ago, solely served the occupying forces of Armenia," the ministry said in a statement.

"Broad coverage of total demolition of the once occupied territories of Azerbaijan by international media, which were labeled as ‘Ghost town’ or ‘Hiroshima of Caucasus’ (referring to Azerbaijan's city of Aghdam) clearly demonstrated the vandalism of Armenia and deliberate policy of destruction of the Azerbaijani historical, cultural and religious heritage supported at the state level,' the MFA said.

"The country that deliberately targeted the Azerbaijani heritage, conducted cultural cleansing and numerous war crimes in the once occupied territories, including the destruction of 927 libraries, more than 60 mosques, 44 temples, 473 historical sites, palaces and museums has neither legal nor moral right to accuse Azerbaijan," the MFA said.

"Armenia during its decades of a continuing policy of occupation did not allow international missions to visit the occupied territories of Azerbaijan. This fact is even clearly reflected in the UNESCO Activities Report published in 2005. The report stated that the government of Azerbaijan expressed concern about the protection of cultural heritage in Nagorno-Karabakh and other occupied territories and requested the dispatch of a fact-finding mission to these territories, however, this mission was prevented due to the occupation of these territories by the Armenian military forces," the statement said.

"Azerbaijan is the most interested side in the conduct of independent and comprehensive international mission to the liberated territories, so the devastation in these areas are well documented. Constructive dialogue is underway on this regard with UNESCO and we hope the mission will take place soon," the ministry said.