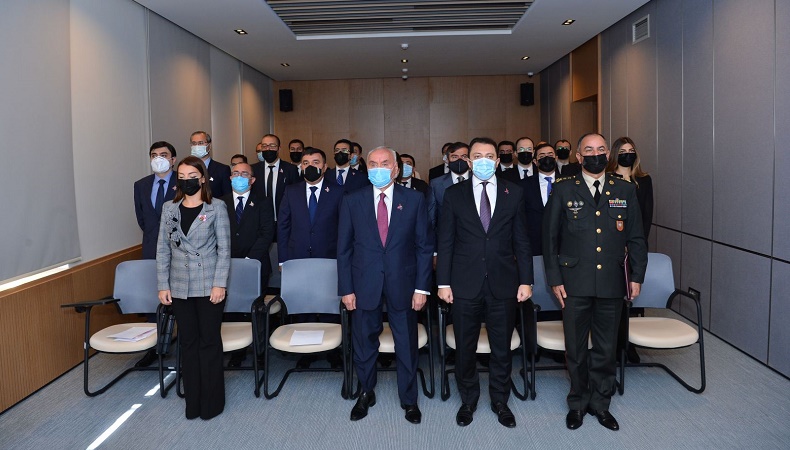 The Ministry of Foreign Affairs of Azerbaijan on September 27, 2021, honored the memory of soldiers and officers who died in the 44-day second Karabakh war for the liberation of Azerbaijani lands, as well as civilians who became victims of Armenian aggression, News.Az reports citing the press service of the Foreign Ministry.

The event was attended by the leadership of the Foreign Ministry, including deputy ministers, ambassadors, heads of departments, as well as a representative of the Defense Ministry.

The commemorative event began with the head of the press service of the Ministry, Leyla Abdullayeva, reading out the statement of the Ministry of Foreign Affairs on the occasion of Remembrance Day.

Deputy Minister Khalaf Khalafov spoke about Armenia's aggressive policy, military provocations that were carried out, and the path to the glorious victory of the Azerbaijani army under the leadership of the President of Azerbaijan, Supreme Commander-in-Chief Ilham Aliyev, as well as about the brilliant victory of the head of state in the military, diplomatic and information spheres.

The representative of the Ministry of Defense, a participant of the war, Colonel Elshad Abilov told the participants of the event about the participation in liberating operations of the Azerbaijani territories during the Second Karabakh War and the heroism of Azerbaijani servicemen on the battlefield.

At the end of the event, a video dedicated to the war of Azerbaijan was shown. The bright memory of the martyrs was honored with a minute of silence.