Azerbaijani in Belgium: Police didn't interfere when Armenians beat us 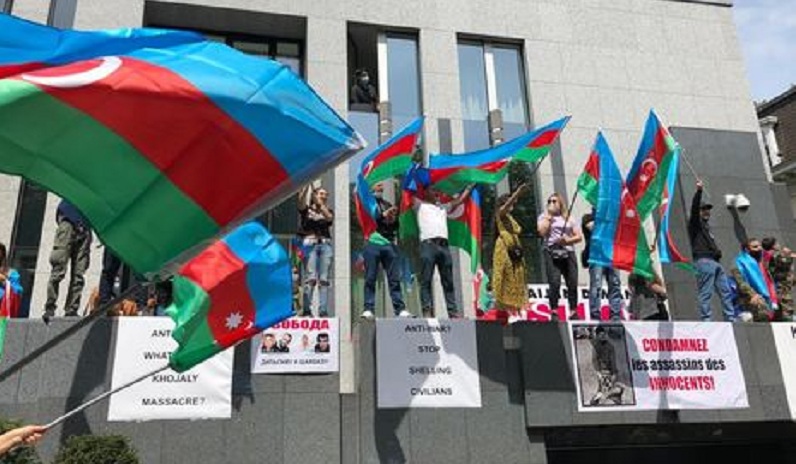 Azerbaijani living in Belgium, Jahan Zahid, was brutally beaten by Armenians during an incident in Belgium, and as he said the police didn't interfere, Trend reports via Azerbaijani TV channel's report.

Zahid said that he was beaten by the Armenians in front of the Azerbaijani embassy in Brussels on July 23.

“The Armenians threw stones at us, and the police did not interfere in any way. The Armenians attacked us and injured one Azerbaijani woman. After the incident, the four of us were walking along the road, suddenly 10 Armenians blocked our way and attacked us, but But they could not cope with us and fled.”

"Then they gathered a group of some 50 people, and attacked us again, this time brutally beating us. We got injured but stood our ground. They demanded we insult our people, our president, and ask Armenia for forgiveness. We held on, so they didn't get what they wanted," Zahid said.

The rallies were met with harsh response from the Armenian diaspora members.

According to the statement of Azerbaijan's State Committee on Work with Diaspora, Azerbaijanis living abroad were injured as a result of provocations organized by radical representatives of the Armenian diaspora. The provocations were carried out in Poland, the Netherlands, Belgium, the US (Washington and Los Angeles), Georgia, Turkey and Ukraine.

In certain cases, as in Poland, the Netherlands and France, the radicals threw bottles, stones, glass shards and explosion packages at the Azerbaijanis, tried to overturn their cars, significantly damaged the buildings of the diplomatic missions of Azerbaijan.