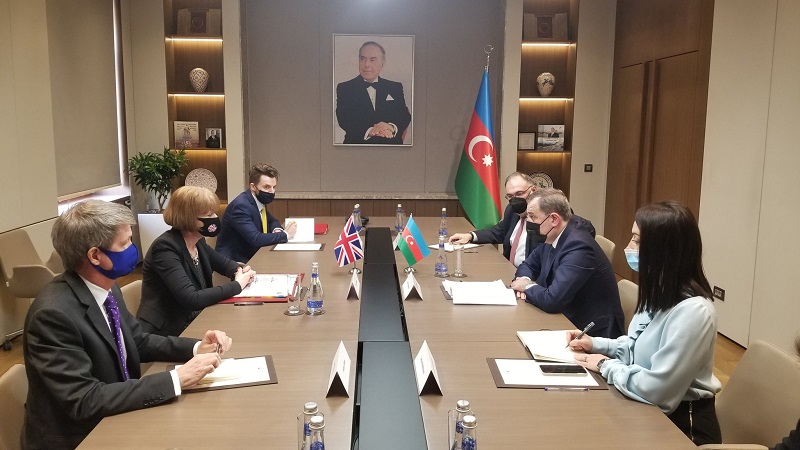 Azerbaijan's Foreign Minister Jeyhun Bayramov on Tuesday met with the UK Minister of State for European Neighborhood and the Americas Wendy Morton.

Welcoming Minister Wendy Morton, Minister Bayramov noted with satisfaction the level of development of bilateral cooperation between the two states.

Speaking about the current situation in the region, Minister Jeyhun Bayramov briefed his interlocutor on the implementation of the trilateral statements of November 10, 2020 and January 11, 2021. It was noted that the implementation of the joint statements is important for peace, security, tranquility and prosperity in the region, as well as it opens new opportunities for cooperation in the region. At the meeting Minister Jeyhun Bayramov also stated that Azerbaijan has taken all necessary steps to implement these statements, as well as informed the other side about the work implemented in the humanitarian sphere.

It was stressed that according to the trilateral statements, the opening of transport and communication lines in the region, as well as the construction of a new transport corridor will serve to ensure progress and normalize relations among the peoples in the region.

It was brought to the attention of the other side that the negative rhetoric shown by some people in Armenia does not serve to normalize relations, but rather aims to deepen enmity between nations. Emphasizing that Azerbaijan has restored its territorial integrity within its international borders and ensured the implementation of related UN Security Council resolutions, the importance of acceptance of the new reality by all was underlined. In this regard, it was stated that any visit to the territories of Azerbaijan without consent of the official Baku is illegal and appropriate measures are taken in this regard.

The sides exchanged views on a number of issues on the bilateral cooperation agenda, including the strategic dialogue and various aspects of political consultations. The sides discussed the contribution of mutual visits to the development of relations, strengthening the legal framework, cooperation in the field of energy and other issues.

Minister of State Wendy Morton stressed the importance of cooperation in the field of gender equality, the development of green energy and tackling climate change. She stressed that the United Kingdom is ready to provide relevant assistance in demining activities in Azerbaijan.

During her working visit to Azerbaijan on a strategic dialogue (bilateral political consultations) between the two states Minister of State for European Neighborhood and the Americas Wendy Morton was received by the President of the Republic of Azerbaijan.

The State Minister also met with the Speaker of the Milli Majlis (Parliament), the Ministers of Education, Energy and Ecology of the Republic of Azerbaijan, as well as the Chairman of the Board of the Administration of the State Historical-Architectural Reserve “Icherisheher” and the Director of the Heydar Aliyev Center.

A bilateral meeting between Azerbaijani Foreign Minister Jeyhun Bayramov and UK Minister for European Neighborhood and the Americas Wendy Morton kicked off in Baku.

On Feb. 8, Morton arrived in Baku on a two-day official visit.