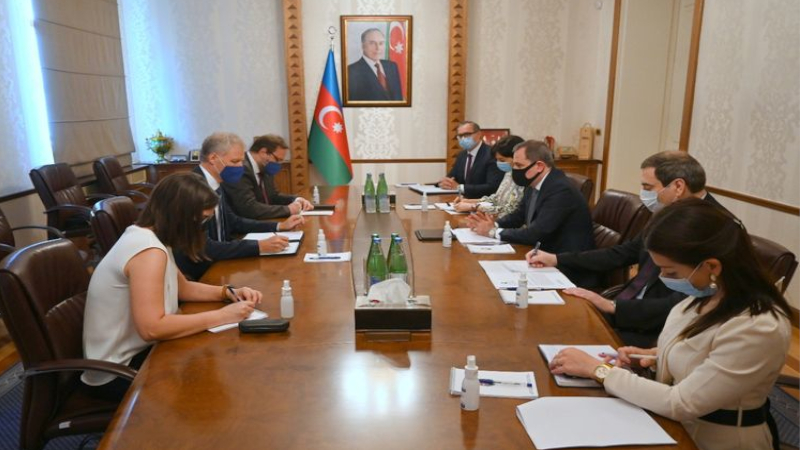 The minister noted that Azerbaijan highly appreciates the partnership with the European Union (EU), the Foreign Ministry told News.Az.

He noted with satisfaction the EU's firm position in support of Azerbaijan's independence, sovereignty, and territorial integrity.

The sides exchanged views on a number of issues on the EU-Azerbaijan cooperation agenda, including a strategic partnership in the field of energy, transportation projects, solidarity and cooperation in combating the pandemic, a continuation of negotiations on a new comprehensive agreement that will form the legal basis of bilateral relations and other issues.

The minister informed his interlocutor about the military provocation committed by the Armenian armed forces in the direction of Tovuz district of the Azerbaijan-Armenian border on July 12, 2020, the goals that Armenia failed to achieve, as well as the aggressive policy of Armenia, which stands as a basis for the tensions in the region. It was stressed that Azerbaijan is committed to the resolution of the conflict through negotiations, but the talks should be real and substantive, not imitation. Stating that it is unacceptable to take the same approach to the aggressor state Armenia and Azerbaijan as a victim of aggression, the Minister stressed the necessity of withdrawal of the occupying forces from all the occupied territories of Azerbaijan and the return of Azerbaijani IDPs to their homes, as demanded by UN Security Council resolutions.

The EU representative referred to the statement of the Spokesperson of the European External Action Service and noted that the EU called to refrain from actions that provoke tension in the region.

He stressed that the EU Special Representative is also closely monitoring the situation in the region and that the EU is interested in ensuring regional peace and security.

The sides also exchanged their views on other issues of mutual interest.