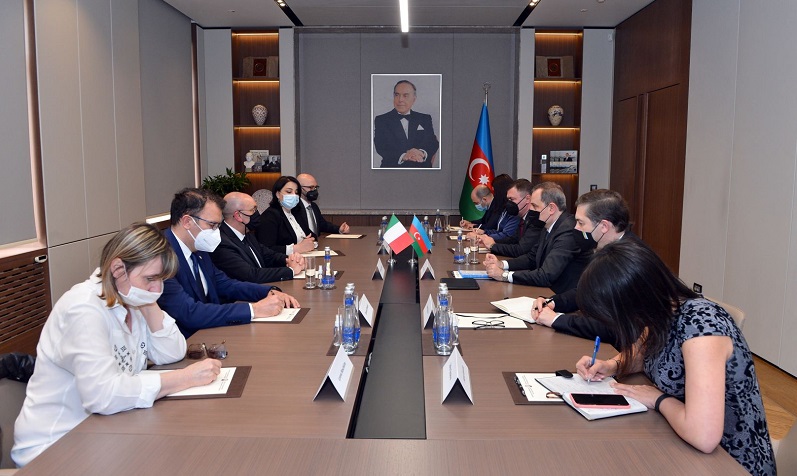 Azerbaijani Foreign Minister Jeyhun Bayramov met with a delegation led by Vito Petrocelli, Chairman of the Standing Committee for External Relations of the Senate (upper house of parliament) of Italy on April 12.

Bayramov stressed the high level of relations between Azerbaijan and Italy, reminding about the visit of the Azerbaijani president to Italy in February 2020, the agreements reached during the visit, including the signed joint declaration on strengthening the strategic partnership.

During the meeting, the sides discussed the prospects for the development of bilateral cooperation in the economic, energy, humanitarian spheres, expressed confidence that after the lifting of restrictions in connection with the COVID-19 pandemic, this interaction will intensify.

The minister informed the Italian parliamentarians about the current post-conflict situation in the region, the implementation of the points of the trilateral declaration.

Bayramov also informed the Italian side about the issues that pose a threat and cause concern in the implementation of the trilateral declaration [on ceasefire and cessation of all hostilities in the Nagorno-Karabakh region], as well as in this context - on the dispatch of sabotage and terrorist forces to the Azerbaijani territory after the signing of this document by Armenia, the neutralization of the members of this group, who killed the Azerbaijani servicemen and civilians.

The Azerbaijani minister stressed that at present, a criminal case is being investigated in this connection, and the Armenian side unreasonably describes these people as "prisoners of war".

Bayramov brought to the attention of Petrocelli that the liberated territories of Azerbaijan are mined by Armenia and it refuses to provide Azerbaijan with maps of minefields.

The foreign minister added that some European parliamentarians, without delving into the essence of the issue, make unfounded statements against the facts presented by the Azerbaijani side.

“The international community must be properly informed on this issue through the representatives of friendly Italy,” Bayramov said.

Petrocelli stressed that the Italian Senate always keeps the issue of the conflict in the spotlight.

“After the conflict, opportunities for integration have been created in the region,” Petrocelli added.