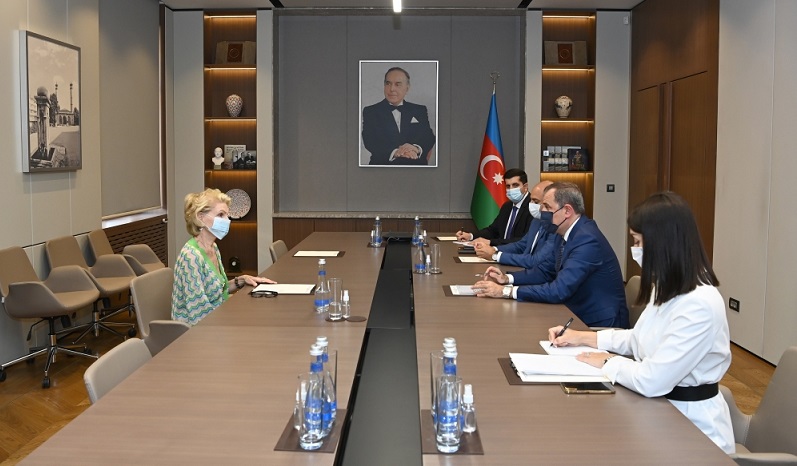 Minister Jeyhun Bayramov hailed the activities of Hedva Ser for peace in the world and the numerous projects implemented in this regard. He expressed his gratitude to Hedva Ser for her attention towards the "Youth Art Camp" project implemented in Shusha by Azerbaijan and Andorra's National Commissions for UNESCO and the Ministry for Culture of the Republic of Azerbaijan. Emphasizing the importance of the city of Shusha for Azerbaijan, the FM informed his interlocutor on the reconstruction works carried out in the city after its liberation, as well as internationally important events held in Shusha. Minister Bayramov highlighted the facts that Azerbaijan has faced a policy of aggression since the first days of its independence, liberated its territories from the occupation in 2020 as a result of the 44-Day Patriotic war, and is currently making efforts to normalize relations on the basis of international law and ensure peace.

Goodwill Ambassador Hedva Ser expressed her gratitude for the warm welcome. She noted with satisfaction that she's carrying out her third visit to Azerbaijan this year. She emphasized that tolerance in Azerbaijan, as well as the tradition of peaceful coexistence of different religions and ethnic groups is greatly appreciated. Speaking about the "Road to peace" project, the UNESCO Goodwill Ambassador for Cultural Diplomacy noted with gratitude Azerbaijan's support for the project and emphasized that in this regard a peace monument authored by her was raised in 2015 in Baku with the participation of First Vice-President of the Republic of Azerbaijan Mehriban Aliyeva.

During the meeting, the sides exchanged views on the work done by Azerbaijan in the direction of the development of the humanitarian field, including science, education, and culture, as well as the allocation of educational grants to students of developing countries and humanitarian aid to these countries.