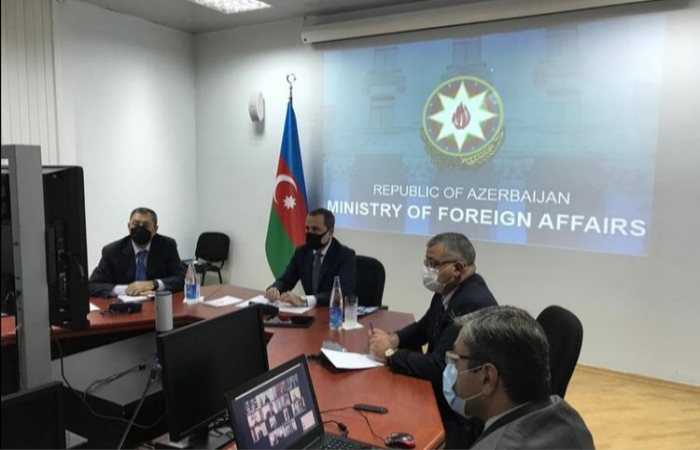 Azerbaijan’s Foreign Minister Jeyhun Bayramov held a videoconference with the heads of delegations and consulates of Azerbaijan in the US and some European countries in connection with the fact that in the recent days radical Armenians have been committing highly aggressive and provocative actions against members of local Azerbaijani communities, as well as diplomatic missions of Azerbaijan in a number of foreign countries

The meeting was attended by Assistant to the President of Azerbaijan, Chairman of the State Committee for Work with Diaspora Fuad Muradov.

The meeting was attended by Assistant to the President of Azerbaijan, Head of Foreign Policy Affairs Department of the Presidential Administration Hikmat Hajiyev and Chairman of the State Committee for Work with Diaspora Fuad Muradov.

The videoconference participants exchanged views on the situation that has developed over the past week in a number of European capital cities, as well as in the US, in connection with the committing of vandalism acts by radical Armenian groups, hate crimes against peaceful Azerbaijani demonstrators, as well as diplomatic missions of Azerbaijan and employees of the diplomatic service.

Bayramov informed the participants about the work carried out with the relevant structures of certain countries to suppress criminal actions with elements of terror by the Armenian radicals, to strengthen the security of the diplomatic missions of Azerbaijan and Azerbaijanis living abroad.

He stressed the importance of bringing to criminal responsibility the persons who committed the provocations.

Hajiyev pointed out that the situation in connection with the events is under the direct control of the Azerbaijan’s president and first vice president.

Muradov stressed that activists of the Azerbaijani Diaspora protest against military provocations of Armenia in foreign countries only within the framework of the law and peaceful actions.

Then the heads of the diplomatic missions and consulates of Azerbaijan in the US and a number of European countries informed about the state of their compatriots who have got bodily injuries as a result of violence acts by radical Armenians in the countries where they are accredited, exchanged views on strengthening the security measures of diplomatic missions, Azerbaijani citizens and Azerbaijanis living abroad, necessity of bringing the guilty persons to justice, taking appropriate legal steps etc.

The heads of diplomatic missions and consulates were instructed to constantly inform about the undertaken measures and their results.