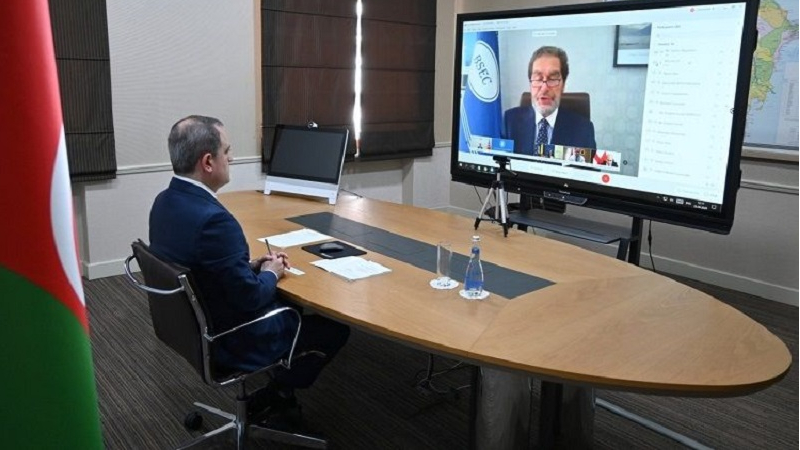 Azerbaijani Foreign Minister Jeyhun Bayramov on Friday took part in an informal meeting of the Council of Foreign Ministers of the member states to the Black Sea Economic Cooperation Organization (BSEC) via videoconferencing.

The minister addressed the meeting held on the sidelines of the 75th session of the UN General Assembly, the Foreign Ministry told News.Az.

Noting in his speech that the ongoing spread of the global COVID-19 pandemic has actualized the issue of cooperation in crisis situations, the minister informed the event participants about Azerbaijan's contribution to international efforts to prevent the pandemic spread, including a number of important initiatives, such as convening a special session of the UN General Assembly and the Summit of the Non-Aligned Movement in the format of the Contact Group.

According to him, although the pandemic has much affected not only health issues but also the economy, Azerbaijan plays an active role in the development of the Caspian-Black Sea cooperation as a country that encourages cross-border trade, communications, and innovations to build a comprehensive and sustainable economy.

Pointing out that Azerbaijan believes in the Black Sea region’s prosperous future, the minister stressed that the main condition for achieving this goal is the need for mutual respect for the independence, territorial integrity, and sovereignty of states the need.

Commenting on allegations of the Armenian foreign minister that Azerbaijan has ignored the call of the UN Secretary-General for a global ceasefire, Bayramov stressed that Armenia, grossly violating the norms and principles of international law, ignoring the resolutions of the UN Security Council, for about 30 years, continues to hold the Nagorno-Karabakh region and seven surrounding districts of Azerbaijan under occupation.

He reminded that on July 12-16, 2020, Armenia made attempt to commit a new act of aggression against Azerbaijan, in the direction of the Azerbaijani Tovuz district on the state border between the two countries, but failed to achieve its political and military goals.

Bayramov informed the meeting participants about the reasons for the pre-planned military provocation of Armenia in the direction of Tovuz district, including its attempt to involve third parties in the conflict, damage important energy and transport infrastructure in the immediate vicinity of the area, and, finally, to divert the attention of the population from internal problems.

The minister noted that Armenian armed forces purposefully targeted the civilian population of Azerbaijan and during the July provocation a 76-year-old elderly man was killed in his house.

Noting that the ongoing occupation of the territories of Azerbaijan by Armenia remains a serious threat to international peace and security, the minister stressed that the sooner Armenia withdraws its armed forces from the occupied Nagorno-Karabakh and other territories of Azerbaijan, the sooner the conflict will be resolved and the opportunities for large-scale cooperation will be opened in the region.

According to the ministry, from 12 countries taking part in the meeting of the foreign ministers of the BSEC member states, 7 were represented at the level of ministers, and five at the level of deputy ministers. One of the meeting speakers was also the EU Commissioner for Neighborhood and Enlargement, Oliver Varhelyi.