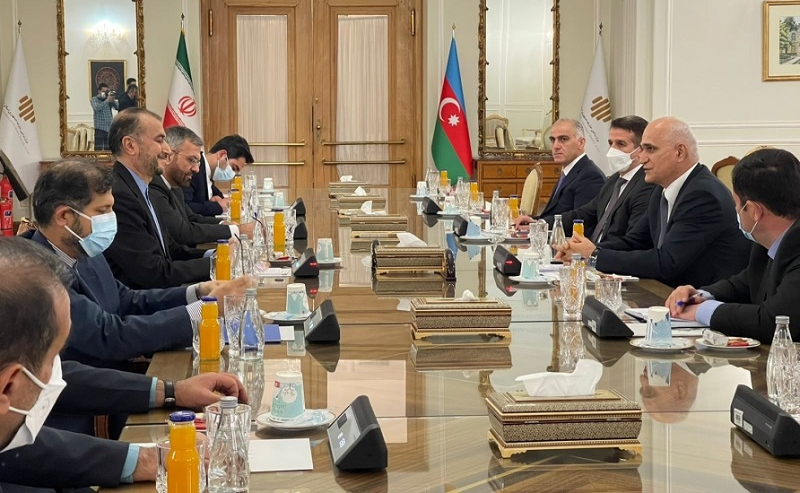 As part of his visit to Tehran, Azerbaijani Deputy Prime Minister, co-chair of the Iran-Azerbaijan State Commission on economic, trade and humanitarian spheres Shahin Mustafayev has met with Iranian Foreign Minister Hossein Amirabdollahian, according to IRNA.

The two sides exchanged viewpoints on the latest developments in Caucasus region, as well as the two countries’ relations.

Amirabdollahian in the meeting expressed delight over the expanding economic ties of the two countries and the deep ties between the two nations.

“We must now take advantage of the economic potentials of both sides in commerce, transportations, energy and tourism fields,” he added.

The Iranian top diplomat, meanwhile, referred to the Islamic Republic of Iran’s capabilities in reconstruction of the recently liberated parts and referred to the two sides’ success in vaccination of their citizens, emphasizing that the two sides’ citizens' visits of each other’s cities and resuming round flights between the two countries is now needed.

Amirabdollahian also emphasized the Islamic Republic of Iran’s permanent stance on supporting the territorial integrity of different countries and emphasized the unchangeable nature of the international borders.

The deputy prime minister of the Republic of Azerbaijan, too, in the meeting expressed delight for the constructive meetings he had with the Iranian oil minister and the minister of roads and rural development, saying “our two countries are now ready to sign historical agreements in oil, gas and transportation fields”.

Mustafayev also referred to the increased bilateral trade volume as of the beginning of the year 2021 by 21% despite the slow world trade during the COVID-19 pandemic, arguing that this is a both sign of the two sides’ friendly ties and broad economic potentials.

The two sides exchanged viewpoints on upcoming Economic Cooperation Organization (ECO) and the documents of the reached bilateral agreements.