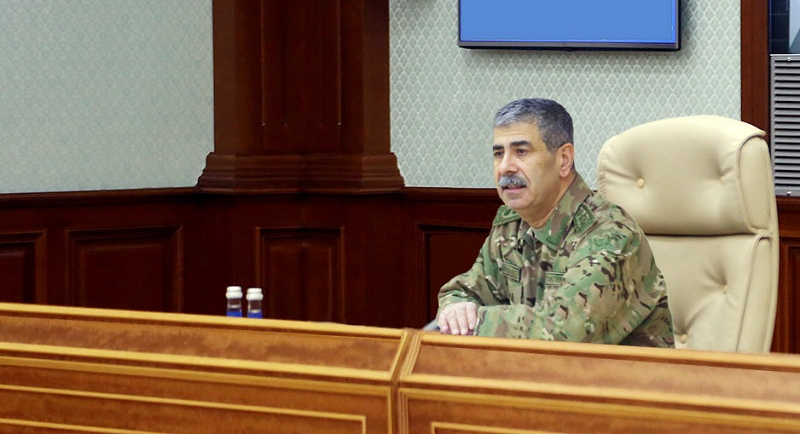 Deputies of Minister of Defense, Commanders of types of troops, Chiefs of Main Departments, Departments and Services of the Ministry attended the meeting. Commanders of the Army Corps and formations stationed in the liberated territories and other officers were also involved in the meeting via video teleconference, the ministry told News.Az.

The minister delivered to the meeting participants the tasks assigned to the Azerbaijan Army by President, Supreme Commander-in-Chief of the Armed Forces Ilham Aliyev.

Minister Hasanov noted that the Supreme Commander-in-Chief highly appreciates the combat and moral-psychological training of the military personnel of the Azerbaijan Army.

The meeting analyzed the situation on the Azerbaijani-Armenian state border and the operational situation in the Karabakh economic zone. The minister gave specific instructions to officials to maintain the high level of combat readiness of military units, constantly improve service and combat activities, as well as increase vigilance.

He also instructed the units to conduct intensive training and practical exercises in accordance with the real combat conditions in order to further improve the combat capability, as well as to be always ready to accurately and timely perform combat tasks.

Hasanov instructed the commander and chief staff to be ready at any moment to use the newly adopted modern weapons, equipment, and other combat means.

The minister ordered the relevant officials to pay special attention to the logistics and engineering support of units conducting combat duty in high mountainous areas and severe climates, as well as to strengthen the health and moral-psychological training of military personnel.