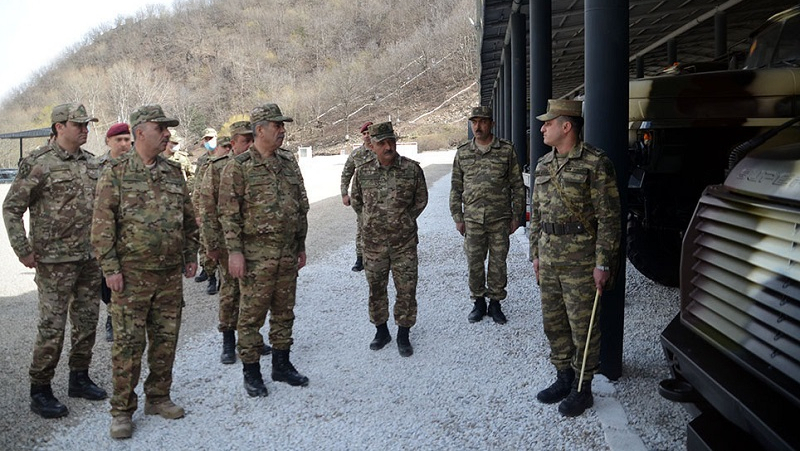 Thanks to the attention and care of President of Azerbaijan, Supreme Commander-in-Chief of the Armed Forces Ilham Aliyev, work which is aimed to improve the social and living conditions of servicemen serving in a high mountainous terrain is underway, the Defense Ministry told News.Az.

Defense Minister Colonel General Zakir Hasanov and other responsible officials of the ministry inspected a number of combat positions in the Kalbajar and Lachin regions of the state border and enquired about the social and living conditions of the servicemen. It was noted that there are all conditions for the qualitative organization and conduct of combat duty during day and night time. Observation posts are equipped with modern technical equipment.

Minister Hasanov met with the military personnel, inquired about their concerns, and wished them success in their service. The servicemen expressed their pride in serving on the state border and thanked for the attention, care, and conditions created in the military unit.

He gave instructions on organizing combat duty and further increasing the combat capability of the troops to the relevant officers.

The minister then inspected the recently commissioned military facilities in the Kalbajar and Lachin regions. It was reported that the necessary conditions for the military personnel in the military infrastructure have been created taking into account modern requirements. To meet all the necessary needs the buildings are equipped with modern equipment, furniture, and inventory. There is a weapons room, a dormitory, a dining room, a kitchen, a medical center, food and storage facilities, a bathroom, and generators that provide uninterrupted electricity to the area.

In the end, after inspecting several military facilities under construction in the Kalbajar and Lachin regions, Minister Hasanov gave relevant instructions and recommendations on the quality of work.

Then the leadership of the ministry inquired about the conditions created for storage, operation, and quality of maintenance of vehicles kept in the park of military units. After getting acquainted with the conditions created at the maintenance and repair points equipped with modern facilities, he was informed that all conditions had been created to provide technical maintenance to military equipment and vehicles. It is planned to provide seasonal maintenance of military equipment and vehicles at the points. Hasanov instructed the personnel to fully comply with safety rules during the work to be carried out at the maintenance and repair points, as well as other important issues were brought to attention.

In the end, after inspecting the progress of construction work in several military facilities in the  Kalbajar and Lachin regions, Minister Hasanov, gave relevant instructions and recommendations on the quality of work carried out in the area.