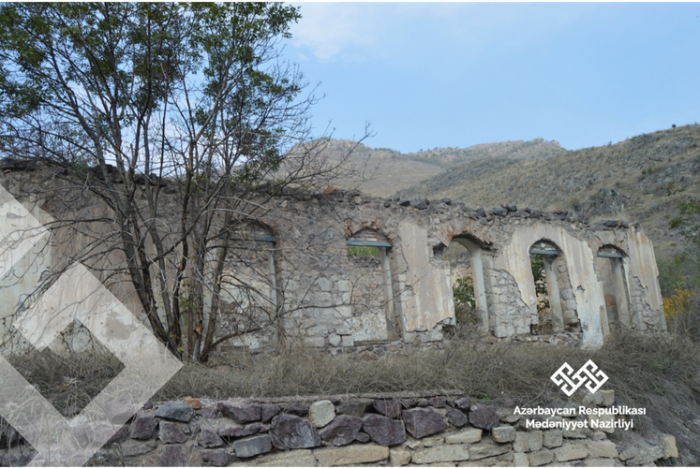 Representatives of the Azerbaijani Ministry of Culture began monitoring monuments and cultural institutions in territories liberated from the Armenian occupation.

The monitoring is being carried out in accordance with the decree of Azerbaijan’s president ‘On the organization of a temporary special administration in the territories of Azerbaijan liberated from occupation’ for the purpose of initial inventory and protection of historical and cultural objects in the liberated lands,

“Some 571 cultural institutions, including 286 libraries, 237 houses of culture and clubs, 19 museums, 24 children's music schools, one cinema, two theaters, and two galleries were identified in the course of the monitoring. All of them are almost completely destroyed,” the message added.

“Unfortunately, mosques, madrasahs, bridges, and churches in the liberated territories were not just destroyed, but at the same time in many cases were used in an inappropriate form, which offended the national and moral values of Azerbaijani people,” said the message.

Four tombs of the 19th century, including the tomb of Ughurlu bey, an architectural monument of local importance, located in the Garaagaj cemetery, were razed to the ground.

“The examples of immovable cultural heritage that have suffered the most damage from the Armenian armed forces are Islamic religious monuments, that is, mosques, tombs, and other places of worship. The Armenians demonstrated their hatred of Azerbaijanis by keeping domestic animals, including pigs, in the mosques that belong to the people of Azerbaijan,” the ministry said.

This reflects the attitude of Armenia towards other religions, shows its true face.

The attitude towards the cultural heritage of the world and Azerbaijan based on the example of these monuments should be condemned by international organizations and foreign countries.

“The vandalism of the Armenian side manifested itself not only in relation to Muslim shrines but also in relation to Christian historical and religious monuments. Thus, many temples related to Caucasian Albania, including the Khudavang and Ganjasar monasteries in the Kalbajar district, were subjected to barbaric treatment,” said the ministry.

The Azerbaijani Ministry of Culture is fully confident that the military-political leadership of Armenia will be held accountable and duly punished for the destruction, misappropriation, and misuse of historical and cultural monuments belonging to the Azerbaijani people.