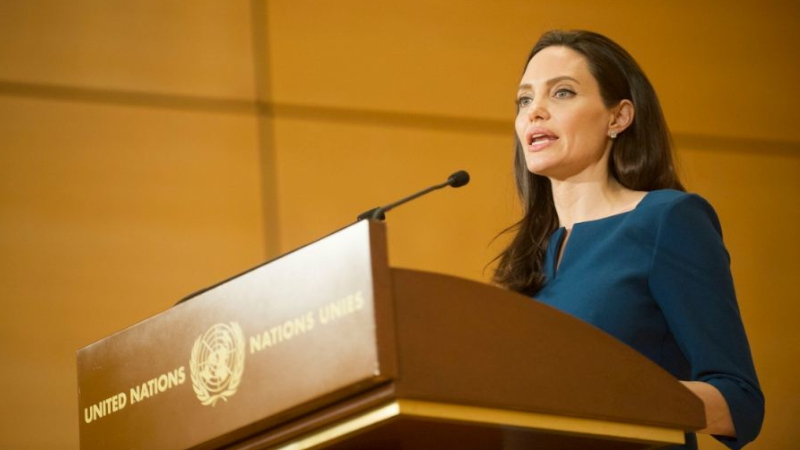 Head of the International Relations Department of the Azerbaijani Community of the Nagorno-Karabakh Region of Azerbaijan Aybaniz Ismayilova has addressed a letter to UNHCR Special Envoy for Refugees Angelina Jolie on behalf of the community's women on the occasion of the World Refugee Day which was marked on June 20.

“We have been watching and witnessing your dedicated service to the cause of refugees as a humanitarian, philanthropist and a Goodwill Ambassador for many years now. The way you care and support these people affected by displacement as you visit different conflict regions, areas of famine, ecological catastrophes, and offer helping hand in easing their plight, advocate for their rights is highly commendable and noble. It was those efforts and your engagement that inspired us to write this letter to you.

Our story is about Sarabayim Mustafayeva, a 96-year-old lady who currently lives in Baku, the capital city of Azerbaijan. Since March of this year, Baku has grown quiet – mostly the wind walks the streets of this “City of Winds”, eagerly searching for people among buildings, who shelter themselves at their homes to protect themselves in these trying times of the pandemic.

Sarabayim watches the streets from her window with a calm look – her relationship with confinement has a three-decade long history by now. She spent almost 70 years of her life admiring a different scenery: lush forests of mountains and grazing cattle. Life in her native village of Baharli, in the Zangilan region of Azerbaijan, had a unique pace, feel, touch and smell, and not a day goes by without her mentioning it. Although the memories fade away in her aging mind with every passing year, the determination to return home only gets stronger. Her days end with watching the evening news on the TV, putting her hand to her ear, not to miss the long-awaited headline about the end of the illegal occupation of Zangilan. In her other hand Sarabayim squeezes the key to the house she left there.

The disruption brought by the current pandemic is not the first in Sarabayim’s life. A mother of seven children – five of her own and two from the previous marriage of her husband, Sarabayim’s life got turned upside down at the age of 38, when she became a widow. It meant raising the kids and educating them all by herself.

By the time that mission was accomplished, and she was ready for her well-deserved peaceful retirement, another disruption came in the form of a forced exile. In 1993 she joined hundreds of thousands of other Azerbaijanis, who were expelled from their homelands, the Karabakh region of Azerbaijan.

Sarabayim moved in with her son’s family who already lived in Baku at the time. But, as much as she tried, she couldn’t find a place for herself pacing all day between the concrete walls of her new residence. She never unpacked her bags, never let herself get comfortable, and never made peace with her “sophisticated cage” without the orchard, trees, and the mountains of Zangilan.

For us here, Sarabayim Mustafayeva is a symbol of longing, expectation, and hope. The symbol of the tens of thousands of displaced grandparents, who spend their days, months, and years in confinement waiting for the day of return to their homeland, and houses which they locked “for a bit” till the speedy return. For them, what they left behind wasn’t just the houses. Because for them, a “house” is more than just four walls, stone and wood – it has a metaphysical meaning, what we, here in Azerbaijan, call an “ocaq”- a “hearth”, the basis that spreads warmth, light and life to us and our descendants, the place where the guardian spirits of ancestors come to check on us, the fire that we keep going with our values, beliefs and prayers.

Sarabayim is waiting to return to that “hearth”, refusing to adapt to city life. Many of her contemporaries passed away in exile, laying the foundation for “the IDP cemeteries” wherever they were scattered. But she sees herself as their Ambassador, resilient and determined to lay foot again on the soil of her Zangilan. Only then the spirits, just like the people, will find peace, and Sarabayim will finish her fight.

Until then, she calmly watches the streets of Baku overtaken by pandemic, not worrying about the virus and determined to “save up her death” till the day she returns to her occupied village.

Nearly a million people in Azerbaijan share Sarabayim’s fate in one way or the other. These people are united by their plight of becoming IDPs and refugees as a result of the Armenian aggression and illegal occupation for nearly 30 years. Although a ceasefire was signed 26 years ago, this conflict keeps taking lives in occasional clashes on the contact line. These shootings also kill civilians residing along the contact line.

During the first five years of the war, about one million people were displaced. They ended up scattered across the country living in tents, box cars and dugouts. In those inhumane conditions’ babies were born, seniors died, kids matured fast and two entire generations struggled with hunger and poor living conditions. Hundreds of thousands of children were deprived of normal nutrition, education and childhood. The tent camps lacked basic medical care, people contracted various diseases, died of sunstroke, cold, starvation or even snake bites in the open fields.

Their sufferings have faded in the background of the international media agenda. They live patiently, still having faith in the justice of the international community. Meanwhile, they are turning simply into unfortunate statistics of the refugees around the world. This life of displacement, which has been lasting for three decades now, shaped the destiny of several generations. But enough is enough!

Our plea to you is to help us make our voices heard in this politics-driven world, where humanity deserves a fighting chance. We would very much like you to hear our stories and convey to the world community where we left our childhoods, youths, homes and memories, the graves of our loved ones, and our peace.

More than 10 years ago, you made a short remark to an Azerbaijani TV correspondent promising to come to Azerbaijan. We were thrilled to hear that a celebrity of your caliber will travel all the way here to see our truth. We are hoping once the pandemic is over, you can make that trip, and see the beautiful region of Caucasus and Azerbaijan return its peace and prosperity it has been known for over the centuries.”