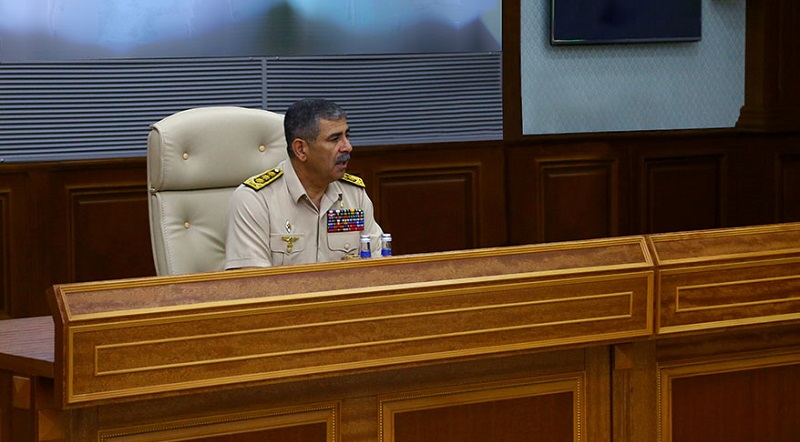 First, the memory of the national leader Heydar Aliyev, and Shehids (Martyrs), who sacrificed their lives for the independence and territorial integrity of Azerbaijan, was honored with observing a minute of silence.

Minister Hasanov delivered to the meeting participants the tasks assigned to the Azerbaijan Army by the President of the Republic of Azerbaijan, Supreme Commander-in-Chief of the Armed Forces, Mr. Ilham Aliyev.

He emphasized that the Supreme Commander-in-Chief highly appreciated the decisive retaliatory measures taken by the Azerbaijan Army to suppress a large-scale provocation committed by the Armenian armed forces on September 12-14, 2022.

It was noted that the successful retaliatory measures, taken at night by units of various types of troops cooperating simultaneously with each other in several directions in a mountainous area with difficult terrain, became another innovation contributed to military science by the Azerbaijan Army. These battles will be researched and analyzed by the world's leading military experts.

The meeting analyzed the current operational situation in the direction of the Kalbajar and Lachin regions, as well as in the territory of Azerbaijan, where the Russian peacekeeping contingent is temporarily stationed.

The minister gave specific instructions to increase the military personnel’s vigilance and to immediately and decisively suppress any possible provocation of the Armenian armed forces.

Hasanov gave instructions to the relevant officers on completing the winter preparatory work in the units according to the plan and delivering the necessary supplies to the units stationed in mountainous areas.

He noted that in accordance with the instruction of the Supreme Commander-in-Chief of the Armed Forces, it is important to quickly complete the necessary measures, related to the organization of the Azerbaijan Army Units’ service and combat activities in new deployment points, in cooperation with other government agencies.

The minister highlighted that the work carried out in troops to improve the service and living conditions plays a significant role in maintaining the combat and moral-psychological state of servicemen at a high level.

Hasanov gave relevant instructions to constantly keep the Shehids' families and servicemen, who lost their health during the battles, in the spotlight and to sensitively treat with their concerns.

At the end of the official meeting, high-ranking officers were given specific instructions on organizing the troops’ service and the ideological work, further improving military personnel’s service conditions, social and living conditions, and medical support, as well as continuing engineering activities in the liberated territories.