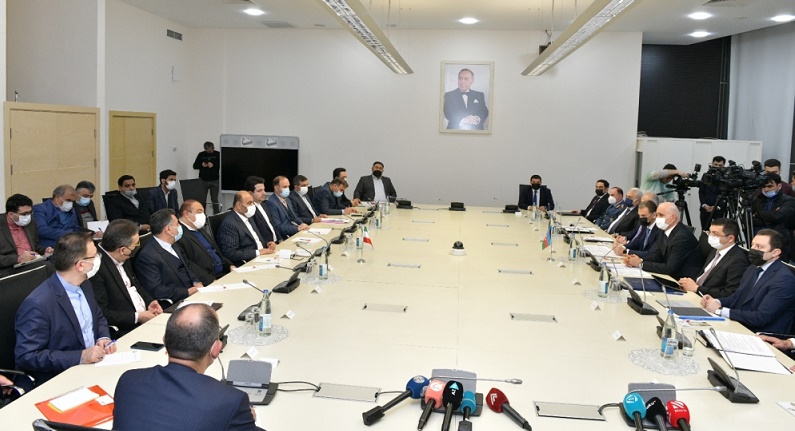 A meeting between the Azerbaijani and Iranian delegations was held as part of the visit of Minister of Roads and Urban Development of the Islamic Republic of Iran Rostam Ghasemi to Azerbaijan, News.Az reports.

From the Azerbaijani side, the meeting was attended by Deputy Prime Minister Shahin Mustafayev, Minister of Digital Development and Transport Rashad Nabiyev and other authorized persons.

During the meeting, they discussed the increase in the daily number of buses running on the regular bus route Baku–Nakhchivan–Baku, reductions in taxes levied on transit through the territory of Iran to the Nakhchivan Autonomous Republic and back by Azerbaijani road carriers, abolition of the duty on each liter of fuel in the fuel tank for vehicles leaving the territory of Iran and other topical issues.

In addition, it was decided to start practical work on the construction of a new highway bridge over the Astarachay river and to intensify work at the Astara Terminal Complex.

During the meeting, the Protocol of the first meeting of the joint working group on the construction of a new highway bridge over the Astarachay river, held on December 7, 2021, was signed. The document was signed by Azerbaijan`s Deputy Minister of Digital Development and Transport Rahman Hummatov and Iranian Deputy Minister of Roads and Urban Development Kheyrollah Khademi.