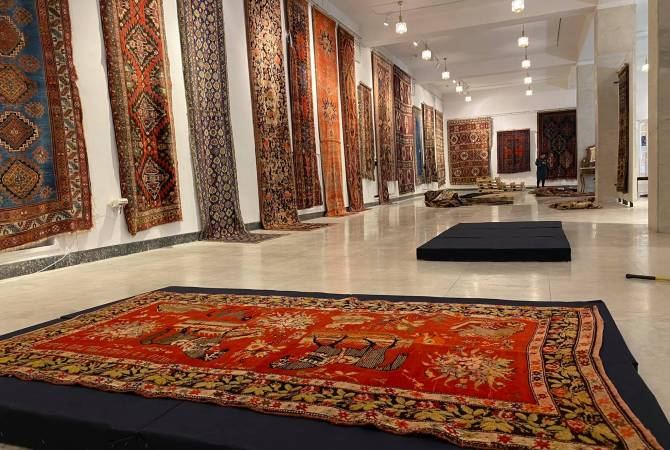 An exhibition of carpets illegally taken out of the Shusha Carpet Museum in Azerbaijan’s Shusha city on November 1 will be reportedly held at the Alexander Tamanyan National Museum-Institute of Architecture in Yerevan on February 20, the Azerbaijani Ministry of Culture said in a statement on Thursday.

The so-called “Artsakh” carpets to be exhibited are samples of the national heritage of Karabakh, an integral part of Azerbaijan, said the statement.

It stressed that this exhibition is another manifestation of the fact of theft and misappropriation by Armenians.

Such a move by Armenia constitutes a gross violation of international law under the Hague Convention for the Protection of Cultural Property in the Event of Armed Conflict of 1954 and Article 19 of its Second Protocol, as well as Article 11 of the Convention on the Means of Prohibiting and Preventing the Illicit Import, Export and Transfer of Ownership of Cultural Property of 1970, the ministry said.

The Azerbaijani ministry said Armenia is fully responsible for this move.

“Historically the Armenians were not engaged in carpet weaving, but in carpet trade, and in the process of trade they tried to form a false idea, presenting Azerbaijani carpets as Armenian. Y. Zedgenidze, who conducted research in Karabakh in the 19th century, writes that the entire Muslim population was engaged in carpet weaving. The carpets weaved in Karabakh ranked first in the entire Caucasus in terms of quantity and quality. Armenians did not engage in this art, on the contrary, they looked at carpet weaving through the prism of "unwanted work",” the ministry emphasized.

The demonstrative holding of an exhibition of carpets illegally taken out of the Shusha Museum under the auspices of the Armenian government is a vivid example of this country’s disregard for international conventions, the Azerbaijani ministry said, calling on UNESCO to adequately react to this.

The Azerbaijani ministry will also carry out the necessary legal procedures with UNESCO on this matter.