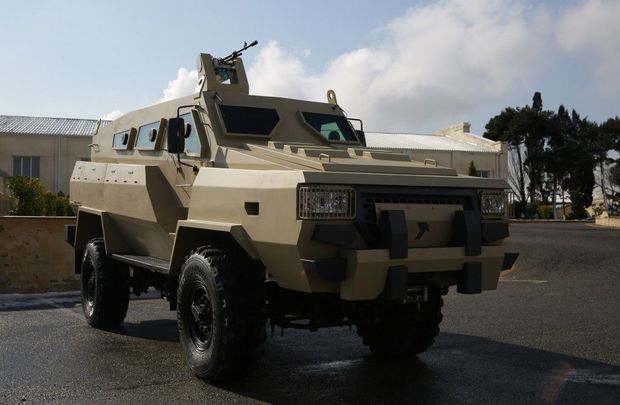 The vehicle was produced by Baku device making plant of Agregat company of the Ministry of Defense Industry.

Speaking at the presentation, Adviser to the Minister of Defense Industry Azad Mammadov said “Tufan” is a 4x4 mine-resistant ambush protected vehicle which features STANAG 3/3A level of armor.

“Tufan” weights 14.7 tons and has a payload capacity of 2.3 tons. It incorporates a V-hull into a monocoque chassis, offering a mine protection level of up to STANAG 3A. Its 360 hp turbocharged diesel engine allows a maximum road speed of 85 km/h.

Close protection of “Tufan” is provided by a stabilized remote controlled weapon station armed with one 12.7 mm NVS machine gun and up to 10 smoke grenade launchers. The vehicle also features a hydraulic rear door, 360° cameras, and an emergency hatch on the roof.