Azerbaijan, UNCHR discuss return of IDPs to the lands liberated from occupation 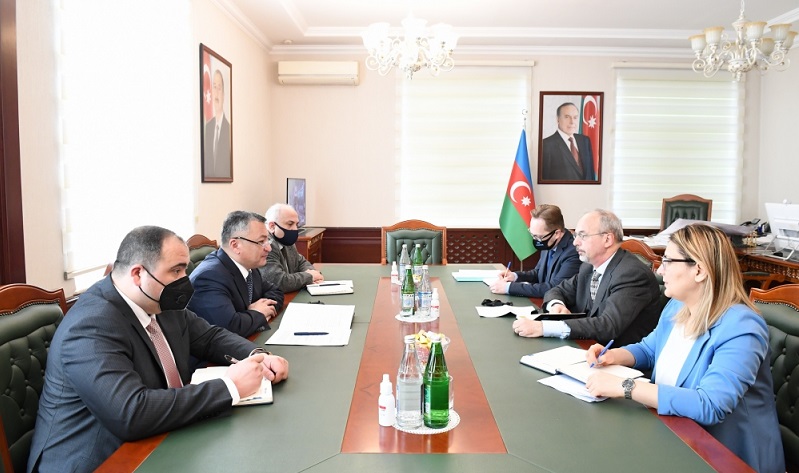 Chairman of the State Committee for Refugees and IDP Affairs of Azerbaijan Rovshan Rzayev has met with Country Representative of the United Nations High Commissioner for Refugees (UNHCR) in Azerbaijan Guido Ambroso.

During the meeting, Rovshan Rzayev highlighted the consistent measures carried out for the improvement of the household condition of former IDPs under the instruction of President, Supreme Commander-in-Chief Ilham Aliyev over the 30 years of the Armenia-Azerbaijan Nagorno-Karabakh conflict. The committee chairman noted that First Vice-President Mehriban Aliyeva also pays special care and attention to the solution of social problems of IDPs, emphasizing her important activities in this regard.

UNHCR Country Representative Guido Ambroso was informed about the work carried out in the direction of evaluation of damage inflicted to the territories of Azerbaijan during the occupation and the implementation of important infrastructure projects. It was noted that the clearing of landmines has been accelerated, and it is intended to give preference to “smart city”, “smart village” conception during the restoration of the residential places. In accordance with instructions of the head of state, a Coordination Headquarters has been established for addressing issues in the liberated territories from the occupation in a centralized manner, as well as a Strategic Action Plan and a Plan of Actions have been developed for the implementation of Great Return.

The committee chairman brought to attention that preparations are underway regarding the return of IDPs to their permanent residences. “The implementation of this process in accordance with international norms and ensuring the return of civilians to their lands in safety and dignity is an important task,” he added.

Guido Ambroso has expressed the UNCHR’s willingness to cooperate regarding its responsibilities towards IDPs and refugees, adding that he will spare no efforts in this regard.

The sides also exchanged views on issues of mutual interest.