Azerbaijan and Türkiye’s leaders expressed solidarity and eternity in Zangilan 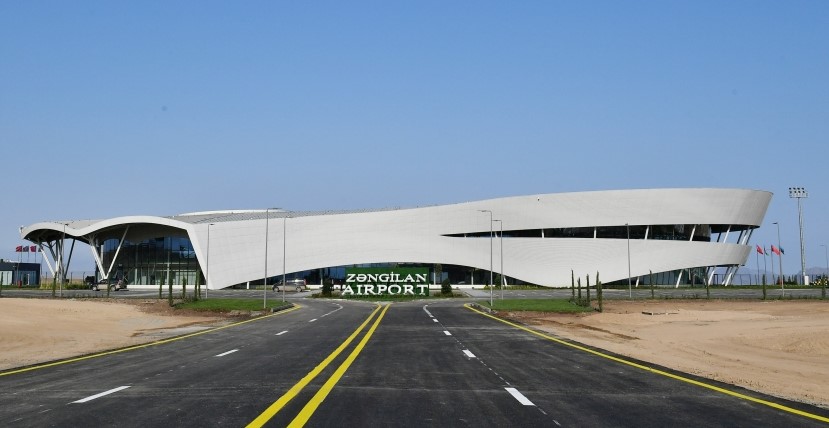 It should be noted that President Erdogan became the first foreign leader to visit the new airport. The plane carrying the Turkish leader took off from Ankara’s Esenboga International Airport and landed at the Zangilan International Airport. The Turkish president is accompanied by Foreign Minister Mevlut Cavusoglu, National Defense Minister Hulusi Akar, Minister of Agriculture and Forestry Vahit Kirishci, Minister of Transport and Infrastructure Adil Karaismailoglu and other officials.

Note also that the airport was laid down on April 26, 2021 and built in just 18 months. The length of the runway is 3,000 meters and 60 meters wide. The capacity of the terminal is designed for accepting 200 passengers per hour. The platform area is 60 thousand square meters, the terminal area is 5000 square meters. The airport can accommodate all types of aircraft with a tonnage of up to 400 tons. It is also capable of serving eight aircraft at the same time. The new airport has been assigned international ICAO and IATA codes (UBBZ and ZZE, respectively), as well as all call signs of EUROCONTROL navigation aids. On September 9, AZAL airline made its first technical flight from Baku to Zangilan International Airport on an Airbus A340-500 liner.

The Zangilan region was liberated from the Armenian occupation in the fall of 2020 during the second Karabakh war. After 30 years of looting and destruction by Armenia,  it is encouraging to see that Karabakh is being restored. It is worth mentioning that this is the second international airport built in Karabakh and the East Zangezur economic region of Azerbaijan after the end of hostilities in the fall of 2020. In October last year, an international airport was opened in the city of Fuzuli with the participation of the two leaders of Azerbaijan and Türkiye. Another airport is under construction in the Lachin region which is planned to be put into operation in 2025.

Considering that the Zangilan Airport will be integrated into Zangezur Corridor, the new airport will also have economic advantages in addition to military and strategic importance. The fact that Eastern Zangezur was under occupation for a long time did not allow its potential to be used. Since Eastern Zangezur is a region distinguished by its great tourism potential, this will allow to attract many local and foreign tourists. As can be seen here, there was a need to build a new airport in order to use the potential of East Zangezur economic region as an important transport and logistics hub.

Furthermore, within the framework of the visit of the head of states, a number of economic projects were launched in the region. President Aliyev and President Erdogan participated in the opening of the first stage of the “Dost Agropark” smart agricultural complex and “Azerbaijan-Türkiye International Forestry Training Center”, “Smart Seedlings” and “Friendship Forest” complex.

President of Türkiye Erdogan, speaking at a joint press conference with President of Azerbaijan Ilham Aliyev in Jabrayl region, considered it important to urge Armenia to pay for the terrible destruction – “They need to be cornered.” The Turkish leader added that the fear and anxiety in some circles about the Zangezur Corridor is misplaced.

“From the first hours of the second Karabakh war, my dear brother, President of Turkey Recep Tayyip Erdogan expressed his support for Azerbaijan. He stated that Azerbaijan is not alone. Türkiye is with Azerbaijan and this political and moral support continued until the last day of the war. This gave us additional strength, it prevented some forces from interfering in this matter. The Turkish-Azerbaijani union has once again triumphed,” said Azerbaijani president. “On November 8, Shusha, considered an impregnable fortress, was liberated from Armenian occupation and the Azerbaijani flag was raised. After that, Armenia surrendered. All this glorious history is our common history,” stated by President Aliyev.

To sum up, President Erdogan’s participation along with Azerbaijani president in the inauguration of Zangilan Airport and recalling of the Shusha Declaration is a strong message for the enemies of both countries.