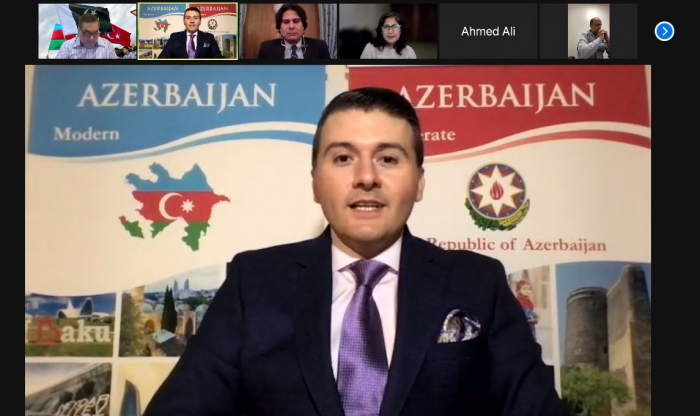 Speaking at the meeting, Consul General Aghayev expressed his profound gratitude for the comprehensive political support by Turkey and Pakistan to Azerbaijan’s struggle for justice during the last fall’s war in Karabakh, as a result of which Azerbaijan restored its territorial integrity and historical justice, after 30 years of illegal occupation of its lands by Armenia, which will now allow for over a million forcibly displaced Azerbaijanis to return to their ancestral lands.

The diplomat thanked the Pakistani American community leaders, especially in Los Angeles, for their full support to Azerbaijan, both during and after the war. Highlighting the establishment of close relations with the Pakistani American community of the U.S. in recent years, Aghayev noted with pride that this process began in Los Angeles and a strong friendship among the three communities was forged through the efforts and joint events of the Consulates General of Azerbaijan, Pakistan and Turkey.

Aghayev said that the notoriously radical Armenian lobby in the U.S. had recently launched a vicious smear campaign against Pakistan due to Pakistan's support for Azerbaijan, noting that this once again demonstrated the true nature of these extremist lobby groups. The Consul General said that the Armenian lobby, which is interested in the continuation of Armenia's hostility towards Azerbaijan and Turkey, is only driven by self-serving interests, and therefore these lobby organizations are not interested in durable peace in the region. Because if Armenia develops normal relations with its neighbors, the capacity for Armenian lobby organizations to raise funds and mobilize the diaspora around radical ideology will substantially decrease and the lobby’s primary raison d’être will gradually evaporate. It is no coincidence that since the Azerbaijan-Armenia agreement of Nov. 10, the Armenian lobby has been working hard to achieve the violation of this agreement, in order to prevent the normalization of Armenia-Azerbaijan relations and to ignite a new war.

Consul General Aghayev noted that immediately after the attacks against Pakistan were launched by the Armenian lobby, the Consulate General condemned them in the strongest terms and expressed solidarity with the Pakistani American community. Aghayev stressed the importance of further strengthening close relations between the brotherly communities of Azerbaijan, Turkey, and Pakistan in the U.S..

Speaking afterwards, Consul General of Turkey Can Oğuz underscored the importance of the historic bonds of fraternity and partnership among Turkey, Azerbaijan and Pakistan. The Turkish Consul General stated that Turkey’s political support to Azerbaijan during the recent clashes with Armenia was based not only on the unshakable ties between the two countries, but also on international law and UN Security Council resolutions that called for an immediate end of Armenian occupation of Azerbaijani territories.

In his remarks, the Turkish Consul General recognized and welcomed brotherly Pakistan’s staunch support to Azerbaijan. He went on to express his regret that the smear campaign and false Armenian propaganda that have been targeting Azerbaijan and Turkey in California has now expanded to include the Pakistani American community.

Turkish Consul General encouraged the three brotherly communities to remain steadfast and to enhance their cooperation in informing the wider constituencies about their pursuit of peace and stability, while exposing the hateful and patently false rhetoric they have to endure. He closed by calling upon the elected leaders of California to be mindful and cognizant of the views and concerns of the Turkish, Azerbaijani and Pakistani American communities rather than promoting a biased and adverse narrative of a single ethnic group.

Leaders of the Pakistani American community spoke highly of brotherly relations between the three countries and communities, emphasizing great satisfaction with the restoration of Azerbaijan's territorial integrity and implementation of the U.N. Security Council resolutions, and expressing hope that this will lead to lasting peace in the region.