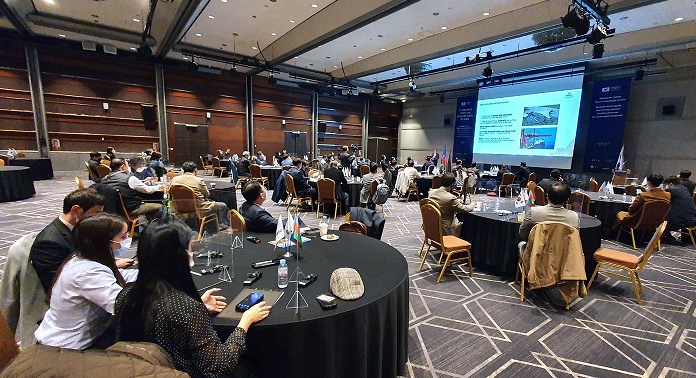 Azerbaijan and South Korea discussed issues of expanding investment and business ties, reports via the Azerbaijani Ministry of Economy.

The issues took place at the Azerbaijan - Korean trade and investment forum under the "Great return to Karabakh: investment potential of the liberated territories, current and planned projects" motto, organized by the Azerbaijan Export and Investment Promotion Foundation (AZPROMO), the Azerbaijani Embassy in South Korea and the Korea International Trade Association (KITA) ), the issues of expanding bilateral ties were discussed.

The event was attended by representatives of more than 50 Korean companies operating in the agriculture and food industry, construction, trade, and other areas.

At the forum, Deputy Minister of Economy of Azerbaijan Elnur Aliyev informed its participants about the measures taken to strengthen cooperation between business and trade organizations of the two countries, noting that more than 70 Korean companies operate in Azerbaijan.

He named the priorities of Azerbaijan's socio-economic development, spoke about the work done to integrate the country's economy into global value chains and the world economy, invited the Korean companies to take advantage of the favorable business environment in the country, actively cooperate and participate in projects implemented in the Azerbaijani territories liberated from Armenian occupation [in the 2020 second Karabakh war].

Azerbaijani Ambassador to South Korea Ramzi Teymurov noted the strengthening of cooperation between the two countries in recent years, the importance of mutual visits in deepening ties, spoke about Azerbaijan's victory in the second Karabakh war.

Acting Head of the department for restoration and development of territories of the Ministry of Economy Zamin Badirkhanov made presentations on the economic recovery of the liberated territories, reconstruction work, the complete projects and reforms on behalf of AZPROMO’s head Yusif Abdullayev to attract foreign investment and a favorable investment climate for investors.

At the event, a presentation of trade, transport and logistics opportunities of the Alat free economic zone and investment projects being implemented in Azerbaijan was held, questions from the participants were answered and the possibilities of mutual cooperation were discussed.