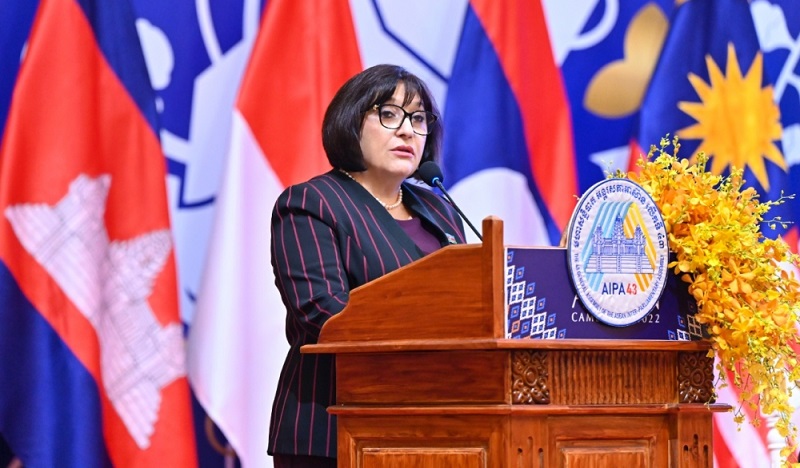 Azerbaijan pursues an independent policy based on the norms and principles of international law, said Sahiba Gafarova, Speaker of the country’s Milli Majlis (parliament).

She made the remarks while speaking at the 43rd General Assembly of the ASEAN Inter-Parliamentary Assembly (AIPA) in Cambodia, the parliament’s press service told News.Az.

The parliament speaker stressed that Azerbaijan attaches great importance to its relations with South-East Asian countries and aims to deepen bilateral and multilateral cooperation with them further.

"We are convinced that enhancing ties with the parliamentarians of ASEAN Member States will add an important dimension to the already existing relations, will serve for the further strengthening of co-operation amongst our countries and people, and will also contribute to peace, solidarity and sustainable development," Gafarova said.

She noted that stationed in the South Caucasus, a crossroads between the East and the West, Azerbaijan is an owner of ancient traditions of statehood upon which the Azerbaijani people depended when establishing the first-ever democratic parliamentary republic in the Muslim East back in 1918.

“That same year and much sooner than the majority of the Western countries could do, Azerbaijan gave women the suffrage. The Azerbaijan Democratic Republic only lived for 23 months, unfortunately. However, our country was able to regain independence and thus start a new epoch in her history in 1991,” the speaker said.

Gafarova stressed that Azerbaijan pursues an independent political course reliant on the norms and principles of international law today.

“Equality, mutual trust and mutually advantageous cooperation are the essential elements of bilateral and multilateral relations. Azerbaijan is a dependable partner contributing in her own way to the maintenance of energy security and implementing projects connecting the East and the West. The groups professing different religions and having diverse ethnic backgrounds have lived in peace and amity in the country for centuries. Multiculturalism is a way of life with our nation. Respect for different cultures, creeds and races is ingrained in the system of Azerbaijani moral values,” she added.

The parliament speaker emphasized that a conscientious member of the international community, Azerbaijan spares no effort to make an input in keeping peace worldwide and in furthering global cooperation and progress. “Azerbaijan is a successful chair of the Non-Aligned Movement, the world’s second-in-size organization after the United Nations, and has authored the initiatives aiming at strengthening global solidarity and grappling with such universal problems as those birthed by COVID-19, for example.”

“Acting as Chair of the Non-Aligned Movement, President of the Republic of Azerbaijan Ilham Aliyev has put forth an initiative to bolster the organization’s parliamentary dimension – which is a token of the significance that our state finds in inter-parliamentary co-operation globally. The Parliamentary Network of the Non-Aligned Movement was established in Madrid in November 2021 and had its first conference in Baku in June this year. Having mentioned that, Sahiba Gafarova declared as Chair of the Parliamentary Network that it was prepared to strike up active links with the other parliamentary forums including the AIPA for the sake of achieving our common goals,” she said.

Gafarova recalled that twenty percent of the internationally recognized territories of Azerbaijan were under the occupation of our neighbor Armenia for almost 30 years.

“Regrettably, the numerous resolutions and decisions of international organizations not barring the UN resolutions, all demanding removal of Armenian troops from the Azerbaijani territories, remained on paper. Armenia carried out ethnic cleansing in these territories, which led to more than one million Azerbaijanis becoming refugees and displaced persons. Almost 4,000 Azerbaijani citizens are reported missing still – ever since the times of the First Karabakh War. During the years of occupation, Armenia deliberately destroyed all our cities and villages, vandalized all historical, cultural and religious sites of Azerbaijan. Aghdam, once the largest town in Karabakh, was destroyed to such an extent that international experts dubbed it ‘Hiroshima of the Caucasus’,” she said.

The parliament underlined that Azerbaijan restored her territorial integrity as well as international law’s norms and historical experience whilst also enforcing the relevant resolutions of the UN Security Council single-handedly in 2020.

“Those lands are being restored and rebuilt on a grand scale now; they have been declared a green energy zone where smart towns and villages are under construction. Infrastructural and transport projects are being carried into life. The first families of former IDPs have already started returning back to their homes. As for opening the Zangazur Corridor, it, in turn, will vastly enhance the transport potential of the whole region.”

“There are serious hurdles for this process to overcome in order to continue, though. One of those is the presence of more than a million mines that Armenia had spudded in those lands. Almost 270 Azerbaijanis have either been killed or mangled by mine blasts ever since the end of the Second Karabakh War two years ago,” Gafarova said.

Concluding her speech, Speaker Gafarova told the assembly participants that it was precisely Azerbaijan endeavoring – despite having fallen victim to occupation – to install lasting peace and stability in the region.

“Moreover, Azerbaijan has invited Armenia to normalize the relations and to sign a peace treaty that would be based on five international law principles. Armenia’s stance is rather destructive, however; Armenia, besides, is making controversial claims that affect this whole process negatively. And then, Armenia ought to refrain from such moves but, rather, take real steps towards signing that peace treaty because doing so is the only way to ensure long-term peace and stability in the region,” she concluded.