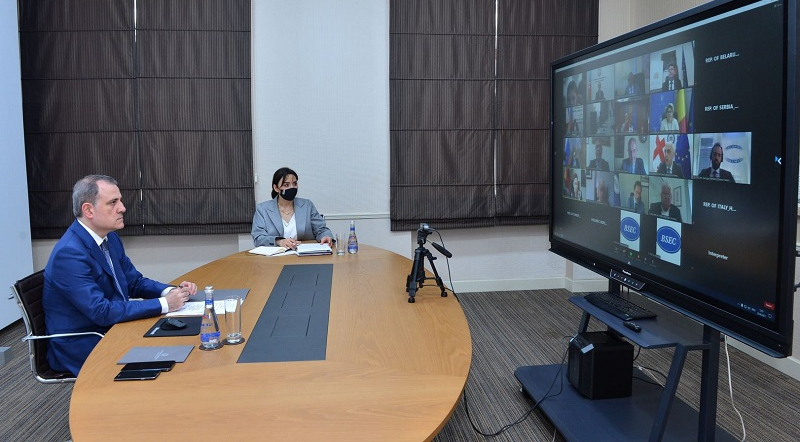 The minister made the remarks during the 43rd meeting of the Council of Ministers of Foreign Affairs of the BSEC member states, which was held via videoconferencing, the Foreign Ministry told News.Az.

He stressed that having restored its territorial integrity, Azerbaijan has repeatedly expressed its determination to normalize relations with Armenia on the basis of mutual recognition of and respect for each other’s sovereignty, territorial integrity and inviolability of internationally recognized borders.

According to the minister, the establishment of good-neighborly relations on this basis has no alternative for long-term peace and stability in the region. “The both sides have unique chance to establish such relations through consistent implementation of the trilateral statements undersigned by their leaders.”

The top diplomat noted that following the liberation of the state border with Armenia from 30-year-long occupation Azerbaijan is currently establishing border control infrastructure along the state border.

He also underlined that hatred against Azerbaijan accompanied by revanchist rhetoric in Armenia is a source of serious concern.

“Anti-Azerbaijani hate speech which unites ruling and opposition political figures in Armenia risks the fragile process of normalization. Armenia must finally live up to its obligations under the customary international humanitarian law, as well as the trilateral statement and release the maps of the mined areas with a view to avoiding additional human suffering,” Minister Bayramov added.