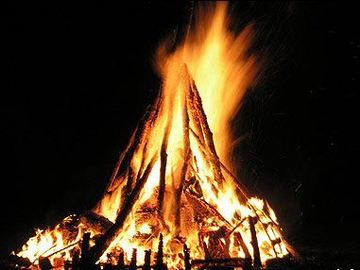 The first day of the ancient holiday of Novruz falls on the spring equinox, 20 or 21 March, the day when the hours of daylight approximately equal those of darkness.

The holiday heralds the arrival of spring and marks the start of a new year.

The four Tuesdays before Novruz are named after the four elements: water, fire, earth and wind. According to legend, God created man from earth and water, gave him warmth and ordered the wind to wake him up. These Tuesdays are, therefore, considered sacred.

Each Chershenbe (Tuesday) has its own traditions.

Od chershenbesi, or Fire Tuesday, honours fire, the second element in the creation of the world. Ancient legends associate fire with the Sun, light and day. It used to be called Dan or Tan and to this day dan means dawn in Azerbaijani.

On all four Tuesdays and on the eve of Novruz, and especially on Fire Tuesday, it's traditional to light bonfires and jump over them. The fires are purifying and take away all your troubles before the start of the new year.
Scholars debate the origins of Novruz. It is often linked with the oldest of the monotheist religions, Zorastrianism, whose scripture, the Avesta, refers to the name Novruz. The Zoroastrian Novruz was a joyful celebration of the arrival of light and warmth after the cold dark winter. Another theory is that Novruz goes back to ancient Mesopotamia. In Babylon New Year was celebrated on the 21st of the month of Nisan (March-April) and the holiday lasted 12 days. In Persian, Novruz means "new day" and in Turkic countries the spring holiday used to be called Turan. The holiday is called Tura to this day by the Chuvash people in the Russian Federation.