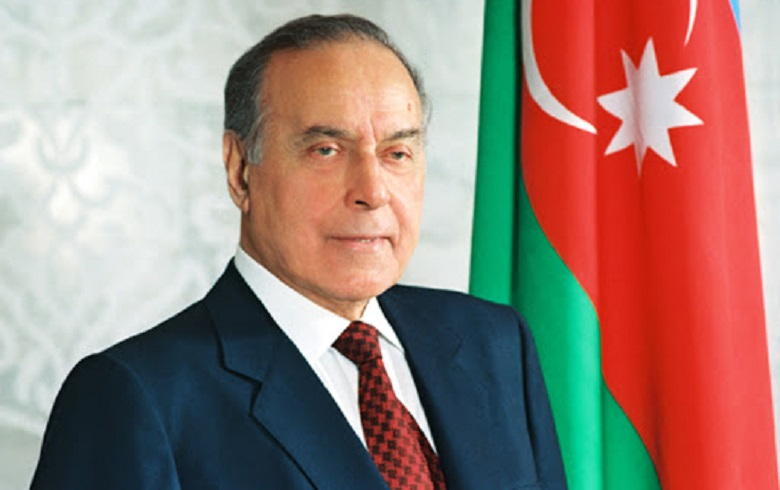 Heydar Aliyev was born on May 10, 1923 in Nakhchivan city of Azerbaijan. In 1939, after graduating from the Nakhchivan Pedagogical School, he entered the Architecture Department of the Industrial Institute of Azerbaijan (now the State Oil Academy of Azerbaijan), but the World War 2 impeded the completion of his education.

Since 1941, Heydar Aliyev headed a department at the People's Commissariat of Internal Affairs of the Autonomous Soviet Socialist Republic of Nakhchivan, and in 1944, was sent to work at state security bodies. He received special education in the cities of Leningrad (now Saint Petersburg) and Moscow. In 1957 he graduated from the History Department of the Azerbaijan State University. Having worked for twenty five years at state security bodies, Heydar Aliyev served as the deputy chairman of the State Security Committee under the Council of Ministers of the Azerbaijan SSR since 1964, and from 1967, held the office of chairman of the committee, and rose to the rank of a major general.

Elected as a candidate to the Political Bureau of the Central Committee of the Soviet Union's Communist Party in 1976, and a member of the Political Bureau in 1982, Heydar Aliyev was appointed the first deputy chairman of the USSR's Council of Ministers. While on this position, Heydar Aliyev headed the most significant areas of the USSR's economic, social and cultural lives.

For twenty years, Heydar Aliyev was a deputy of the Supreme Soviet of the USSR and the Azerbaijan SSR, and for five years, worked as a first deputy chairman of the USSR's Council of Ministers.

In October 1987, as a sign of protest against the policy pursued by the Political Bureau of the Central Committee of the Soviet Union's Communist Party and, personally, by Secretary General Mikhail Gorbachev, Heydar Aliyev resigned from his post.

In connection with the tragedy committed on January 20, 1990 in Baku by the Soviet troops, Heydar Aliyev, appearing the next day at the Representative Office of Azerbaijan in Moscow with a statement, demanded that the organizers and executors of the crime committed against the people of Azerbaijan be punished. As a sign of protest against the hypocritical policy of the USSR leadership towards the critical conflict in Nagorno-Karabakh, in July 1991, he left the Communist Party of the Soviet Union.

In May-June 1993, when, as a result of a crisis in the government, the country was on the verge of a civil war and faced the peril of losing independence, the people of Azerbaijan demanded to bring Heydar Aliyev to power, and the then leaders of Azerbaijan were obliged to officially invite Heydar Aliyev to Baku.

On June 15, 1993, Heydar Aliyev was elected chairman of the Supreme Council of Azerbaijan, and on June 24, by a resolution of the National Assembly, he proceeded to fulfilling the authorities of the president of the Republic of Azerbaijan.

On October 3, 1993, as a result of the nationwide vote, Heydar Aliyev was elected president of the Republic of Azerbaijan.

At the election held on October 11, 1998, he was re-elected president of the Republic of Azerbaijan. Heydar Aliyev, giving his consent to be nominated as a candidate at the 15 October 2003 presidential election, relinquished to run at the election due to health problems.

On December 12, 2003, national leader of the Azerbaijani people, President Heydar Aliyev passed away in the Cleveland hospital in the US, where he had been undergoing medical treatment, and on December 15, was buried at the Alley of Honor in Baku.

This year, for the first time in the modern history of independence, Azerbaijan pays tribute to the bright memory of the great leader Heydar Aliyev amid the restoration of the country's territorial integrity. The glorious Victory of Azerbaijan in the 44-day Patriotic War began precisely with the activities to strengthen the army, develop the economy, with large-scale work to strengthen statehood, creative work, which began with the period when the national leader returned to the leadership of the country. Liberation under the leadership of the President of Azerbaijan, Supreme Commander-in-Chief of the Armed Forces Ilham Aliyev from the occupation of Azerbaijani lands during the 44-day Patriotic War is a glorious page in the centuries-old Azerbaijani history. This Victory is a triumph of the ideals of independent statehood, to which the great leader Heydar Aliyev strove.