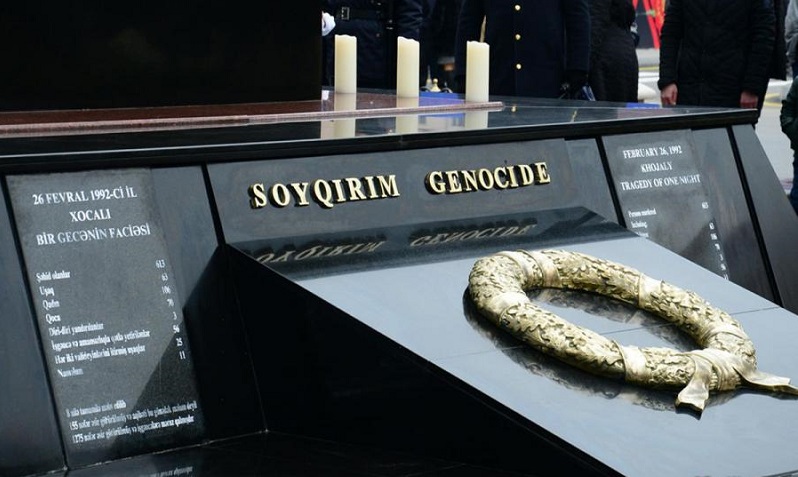 During the Karabakh war, the Armenian military committed an act of genocide against the population of Azerbaijan’s Khojaly town consisting of 7,000 people on Feb. 26, 1992.

All these acts were committed by the Armenian military with extreme mercilessness and inconceivable barbarism. The second battalion of 366th regiment under the command of Major Seyran Ohanian, the third battalion under the command of Yevgeniy Nabokhin, staff chief of the first battalion Valeriy Chitchyan and more than 50 officers and ensigns took part in the attack, according to "The Investigation Materials Concerning Khojaly Occupation".

The town residents who attempted to flee were killed by Armenians in ambushes. According to the Russian Remedial Center Memorial, corpses were brought from Khojaly to Aghdam. Facts of humiliation on dozens of bodies were registered. Forensic examination in Aghdam was performed on 181 corpses, including 13 children. The examination revealed that 151 people died from bullet wounds, 20 people died from shrapnel wounds, 10 were killed with blunt instruments. Facts of scalping people alive were also revealed.

The Khojaly genocide became one of the most terrible and tragic pages of Azerbaijani history.

The Karabakh events, which began in 1988, led to the destruction of towns and villages, the murder of thousands of innocent people, as well as the exile of hundreds of thousands of Azerbaijanis from their historical lands.

International organizations and parliaments of world countries should give political and legal assessment to the Khojaly genocide committed by Armenia in Azerbaijan’s territories.

The parliaments of several countries have made decisions recognizing the Khojaly genocide.