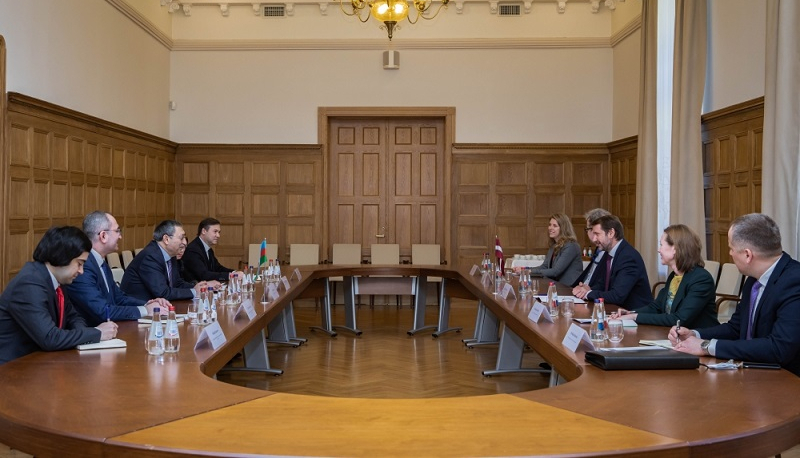 An Azerbaijani delegation led by Deputy Foreign Minister Khalaf Khalafov has held meetings with Under-Secretary of State of the Ministry of Foreign Affairs of Latvia, Political Director Andzejs Vilumsons, Head of the Office of the Presidential Advisers of Latvia, Advisor to the President on Cultural Policy Sarmīte Ēlerte and Minister of Transport, co-chairman of the Intergovernmental Azerbaijani-Latvian Commission Tālis Linkaits, as part of a visit to Riga, the Azerbaijani Foreign Ministry told News.Az.

The first meeting of the strategic dialogue between Azerbaijan and Latvia was held on April 21 of this year. The Azerbaijani delegation was headed by Deputy Foreign Minister Khalaf Khalafov, and the Latvian delegation - by Under-Secretary of State of the Ministry of Foreign Affairs, Political Director Andzejs Vilumsons. During the meeting, the special significance of the first meeting of the Strategic Dialogue, organized for the first time between the two countries, was emphasized. It was noted that this year marks the fifth anniversary of the “Joint Declaration on the Establishment of a Strategic Partnership” signed in 2017 between the two countries and it is important for defining new goals for the strategic partnership and conducting a close dialogue towards a qualitative further enrichment of the bilateral agenda. The exceptional role of reciprocal visits of the Presidents of the Republic of Azerbaijan and the Republic of Latvia in the development of bilateral relations was pointed out.

Khalf Khalafov highlighted new realities in the region after the 44-day war, the situation related to the full implementation of trilateral statements, Azerbaijan's position on the normalization of relations between the two countries, the opening of all transport and communications, as well as demining process, restoration and reconstruction works carried out in the liberated territories.

The sides noted the importance of the activities of the Intergovernmental Commission on Economic, Scientific, Technical and Cultural Cooperation between the Government of the Republic of Azerbaijan and the Government of the Republic of Latvia, and also discussed topical issues on the agenda of bilateral strategic partnership, in particular, issues of expanding cooperation in political, economic, trade, transport, humanitarian spheres, cooperation in a multilateral format and within the framework of international organizations, as well as the situation in Ukraine.

In addition, the Azerbaijani delegation met with members of the Latvian Seimas' Group for Promotion of Cooperation with the Azerbaijani Parliament, and the sides emphasized the importance of inter-parliamentary dialogue in the implementation of cooperation between the two countries.