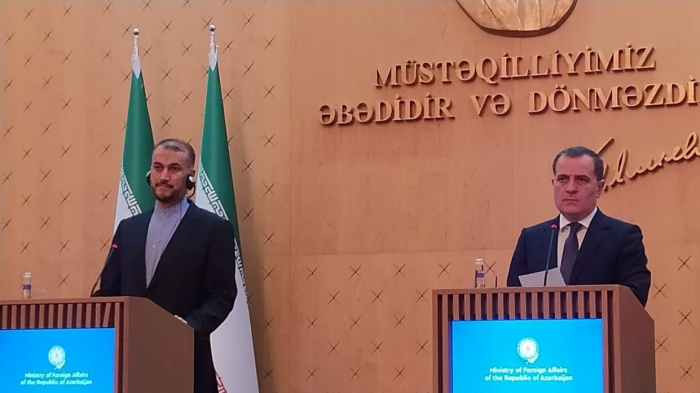 Azerbaijan and Iran are working on a roadmap for new projects, Azerbaijani Foreign Minister Jeyhun Bayramov said at a joint press conference with Iranian Foreign Minister Hossein Amir Abdollahian, who is on a visit to Baku, Trend reports.

"The meeting, which took place on November 28 in Ashgabat, is of particular importance in relations between our countries. After the restoration of Azerbaijan's independence, cooperation agreements were signed between our countries. At today's meeting, we discussed the development of bilateral relations, cooperation within the Organization of Islamic Cooperation and other issues," he said.

Speaking about joint projects implemented by Iran and Azerbaijan, the minister mentioned the construction of the Khudaferin, Gyz Galasy, Ordubad power plants, as well as the construction of a bridge across Astarachay, further development of the Iran-Azerbaijan-Russia corridor and the launch of a joint automobile plant in Neftchala.

Bayramov noted that within several months after the formation of the new government in Iran, concrete actions were taken on a number of new projects.

"An example of this is the agreement reached in Ashgabat on the transit of Turkmen gas," he added.