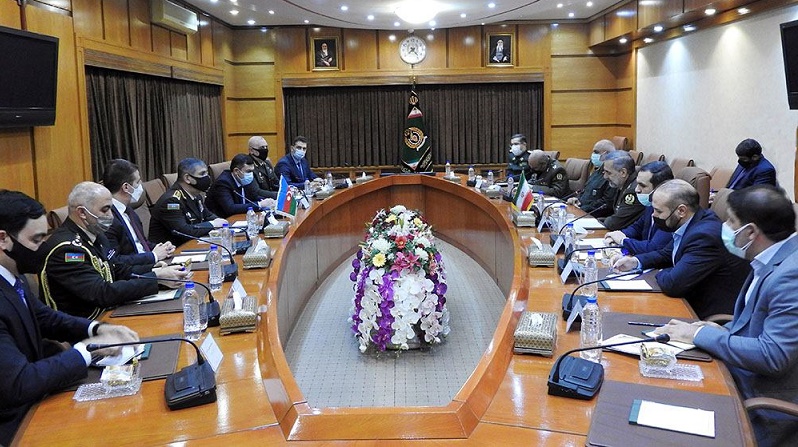 Azerbaijani Defense Minister Colonel General Zakir Hasanov, who is on an official visit to the Islamic Republic of Iran, met with the Minister of Defense and Support of the Armed Forces of this country, Major General Mohammadreza Garai Ashtiani, News.Az reports citing press service of Defense Ministry.

Before the start of the meeting, Defense Minister Colonel-General Zakir Hasanov got acquainted with various military products presented in the exhibition hall of the Ministry of Defense and Support of the Armed Forces of the Islamic Republic of Iran.

Expressing satisfaction with the meeting with the guests in Iran, Major General Mohammadreza Garai Ashtiani stressed that religious, historical and cultural ties between our peoples are based on friendly traditions. The Iranian minister emphasized that the development of military cooperation between Azerbaijan and Iran is an important factor.

In turn, expressing gratitude for the high hospitality, Colonel-General Zakir Hasanov noted that the Azerbaijani-Iranian relations have a long history and are built on solid foundations. Colonel General Zakir Hasanov invited the Minister of Defense and Support of the Armed Forces of the Islamic Republic of Iran to pay an official visit to Azerbaijan.

At the meeting, the activities of the joint working group for the development of military cooperation, created between the Defense Ministries of Azerbaijan and Iran, as well as the activities carried out on the basis of a bilateral agreement, were highly appreciated.

An exchange of views also took place between Azerbaijan and Iran on the prospects for developing cooperation in the military, military-technical and military-medical fields, organizing mutual visits of expert groups and other topics of interest.

As a result of the meeting, a protocol was signed between the parties.