Azerbaijan-Iran border outposts reopen after being liberated from Armenian occupation 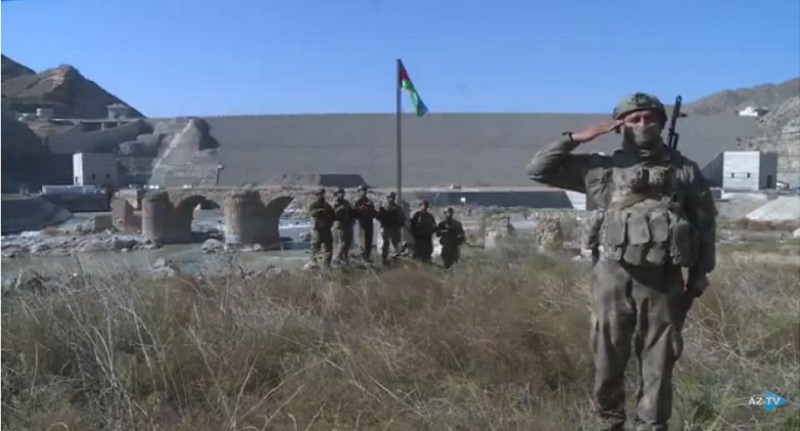 Azerbaijani border guards raised the state flag of Azerbaijan in ‘Soltanli’, ‘Khalafli’, ‘Khudaferin’, and ‘Gumlag’ outposts in the mostly liberated Jabrayil and Zangilan districts on October 30, which began their service-combat activities, Trend reports.

Organizers of the outposts’ opening ceremony emphasized that the successful military operations liberate the ancient Azerbaijani lands from Armenian occupation under the leadership of the Commander-in-Chief, President of Azerbaijan Ilham Aliyev brought the Great Victory Day closer for the Azerbaijani people.

In order to increase the fighting and military-patriotic spirit of every Azerbaijani border guard, officer, warrant officer, sergeant, and soldier, to create conditions for their service to protect the state border at border outposts in the liberated from the occupation areas, a modern border guard infrastructure will be formed in a short time, for servicemen and their families will be provided with the necessary service and living conditions.

It should be noted that the liberation of 132 kilometers of the Azerbaijani-Iranian state border is a very important event for the complete restoration of the state borders of Azerbaijan.

The fact that the President of Azerbaijan, Commander-in-Chief of the Armed Forces Ilham Aliyev on October 19 congratulated the personnel of the State Border Service on the occasion of raising the state flag of Azerbaijan on the Khudaferin bridge and the liberation of several settlements with the participation of the State Border Guard Service, as well as on October 22, he congratulated the entire Azerbaijani people on the occasion of taking full control of the Azerbaijani-Iranian border, was greeted by every Azerbaijani border guard with enthusiasm.

In accordance with the Azerbaijani president's instructions, urgent measures are being taken in these territories to organize service and combat operations and restore the necessary system of border protection.

The protection of the state border in these territories, occupied by the Armed Forces of Armenia in 1993 and liberated after 27 years, is organized by the personnel of the ‘Horadiz’ border detachment of the border troops of Azerbaijan's State Border Service.