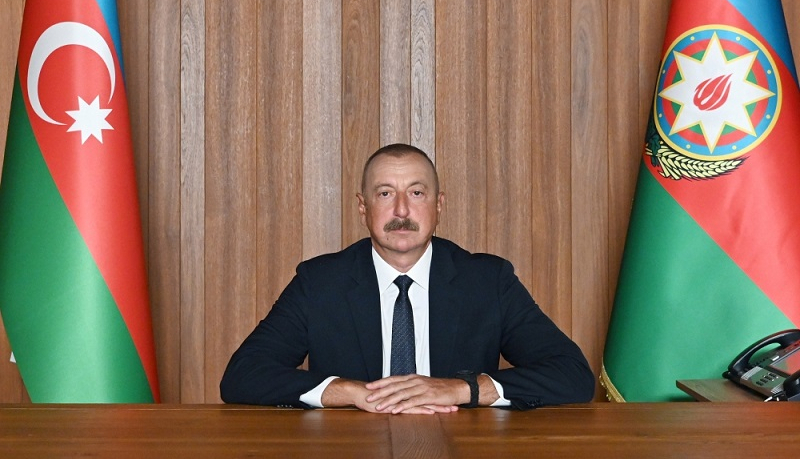 Azerbaijan ratified the Paris Climate Agreement, with a voluntary commitment to achieve a 35 percent reduction in greenhouse gas emissions by 2030 compared to the base year 1990, said President Ilham Aliyev at the General Debate of the 76th Session of the UN General Assembly.

The head of state said Azerbaijan is exploring the possibilities for setting conditional targets for 2050 under the Paris Agreement.

“Currently the share of the renewables in the total energy capacity of our country is 17 percent. The target is to increase this number to 30 percent by 2030. Agreements have been signed with three major international energy companies to invest in the construction of three wind and solar power plants with total capacity of over 700 megawatts in the coming 3-4 years. One of these projects will be implemented in the Eastern Zangazur region liberated from Armenian occupation during the 44-day Patriotic War. This 240-megawatt solar power plant will be so far the major foreign direct investment project in the liberated territories of Azerbaijan,” he said.

President Aliyev invited other international energy companies to come and invest in green energy in the liberated Azerbaijani territories.

“I announced the recently liberated Karabakh and Eastern Zangazur as Green Energy Zone. The liberated territories of Azerbaijan have the proven potential of 7200 megawatts of solar energy and 2000 megawatts of wind energy. Azerbaijan, along with crude oil and natural gas, recently became an exporter of electric energy. Today, we export electric energy to 4 neighboring countries. Meantime, domestic electricity consumption is rising due to population growth and economic development. During 8 months of this year non-oil industry of Azerbaijan grew 18.4 percent,” the head of state added.